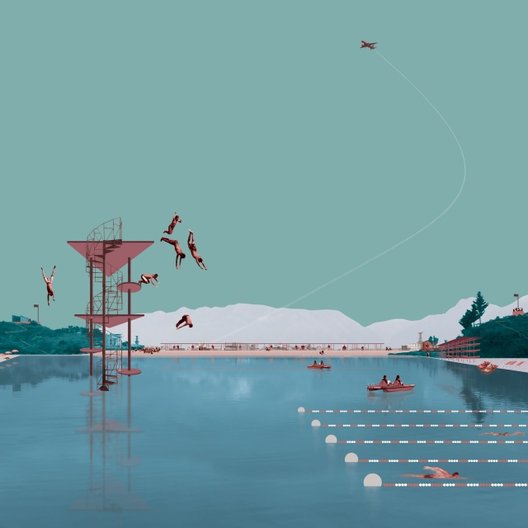 Tirana is a city with multiple identities. Historically the city sits at a very important crossroads of the Balkans and today is a hectic center undergoing rapid transformation. After the fall of the communist regime (1992) Tirana experienced a booming and unregulated expansion and is currently striving to design its future development. The TR030 general plan conceived by Stefano Boeri and the transformation of central Tirana’s Skanderbeg Square by 51n4e are the two faces of this tremendous tour de force. The two projects, in different ways, address the productive diversity of greater Tirana – a metropolitan area of over 760,000 inhabitants. Envisioning an orbital forest surrounding the dense nucleus of Tirana and foreseeing territorial evolution with a constellation of punctuating projects, both the plan and the square look towards the future of Tirana through the lense of urban ecology.

Starting from this premise our visiting school will explore an extreme scenario: The city of Tirana as a National Park.

This idea takes inspiration from a movement initiated in London by Daniel Raven-Ellison, a self-described ‘guerrilla geographer’ and National Geographic explorer, who is lobbying for the entire city of London to be declared a National Park.

Raven-Ellison has collected support from prominent London politicians, including mayor Sadiq Khan, for his idea of a ‘National Park City’. “London is the most biologically diverse place in the United Kingdom precisely because people are there,” he says. “Why shouldn’t that amazing diversity be valued alongside that of more remote and less altered places?”

Learning from London and discovering Tirana, our visiting school will investigate the delicate relationship between nature and architecture in an unprecedented context.

The Visiting School will be led by Vanessa Norwood, AA Head of Exhibitions and PIOVENEFABI, a Milan-based architectural office led by Ambra Fabi and Giovanni Piovene. Vanessa has been working with Albania since 2015 Vanessa Norwood when she was invited by the British Council to speak at a public lecture at the National Gallery of Arts. Alongside Vicky Richardson and Sadie Morgan from dRMM, Vanessa explored the effect of 'cultural insertions' in the city and examine the role of the artist and architect in provoking dialogue through the act of positively interrupting everyday life. She then went on to sit on the international jury for Atelier Albania's Culture Quartet.

For more information and to apply visit the Architectural Associations website