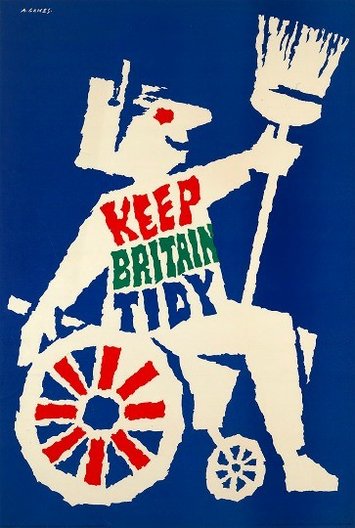 Each month one member of the ADF team selects a design object that has caught their attention. This month our Director, Sarah Mann, has selected the poster 'Keep Britain Tidy' from 1963 by Abram Games.

This month I have been delving into the British Council Collection, looking at the Mabey Collection, an incredible personal collection of British posters donated to the British Council in 1977 by Mrs Phyllis Mabey. The majority of the collection covers the first half of the 20th century and includes prime examples of London Transport posters from the 1920s and 30s designed by commercial artists such as Edward McKnight Kauffer, Tom Purvis and Frank Newbould, some 40 posters commissioned by Shell from artists such as Paul Nash, Graham Sutherland and Ben Nicholson as well as posters advertising everything from department stores and dry cleaners to concerts and plays.

This poster for the ‘Keep Britain Tidy’ campaign was produced in 1963 by Abram Games, one of the twentieth century’s great graphic designers. The design is based on a pastiche of Britannia, with the wheel of the dust cart representing her union jack shield.

Games was born in the East End of London on the first day of the outbreak of the First World War in 1914. After briefly studying at Central St Martins, he began his career as a commercial artist in the inter-war period producing posters for London Underground and other public bodies, something he continued to do throughout his career. He worked for the government during the Second World War, designing public information posters where he was able to develop more experimental work, free from the constraints of his more commercial clients. Games’ motto for his work, "maximum meaning, minimum means", is characterised by his bold use of colour and type, often mixed with images inspired by the surrealist movement. His ability to convey strong, social messages in his work gives his posters an enduring power and appeal, providing an intriguing record of our social history.

Find out more about the British Council Collection here.