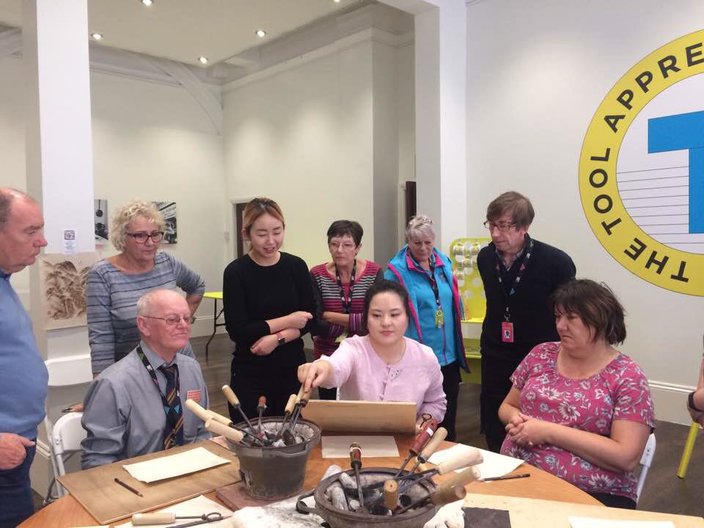 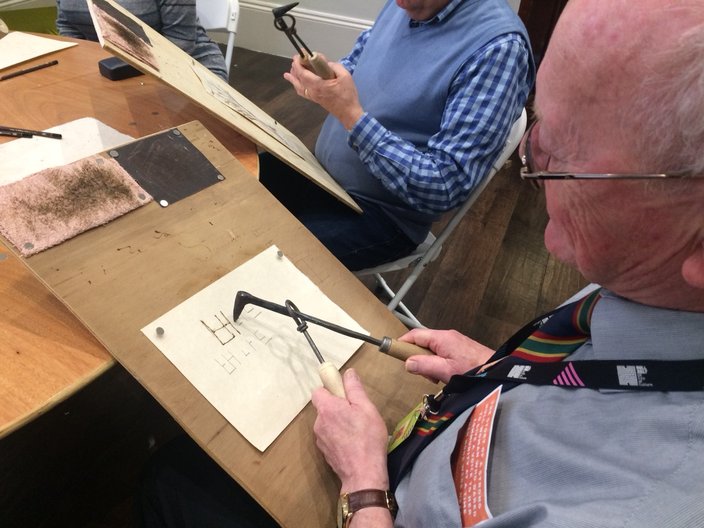 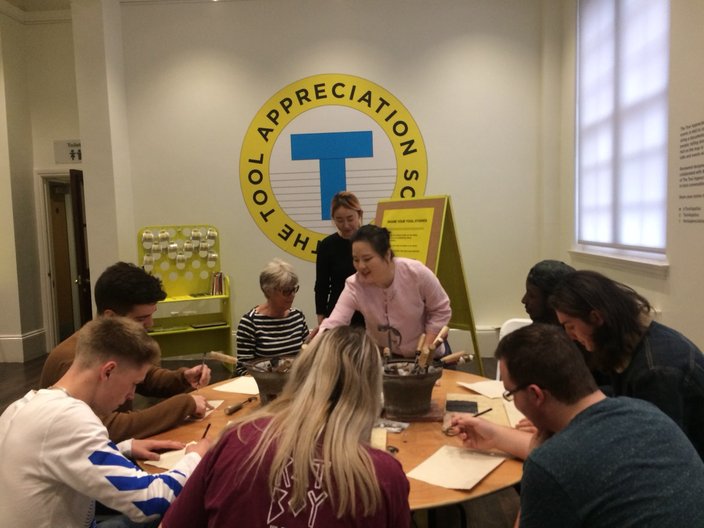 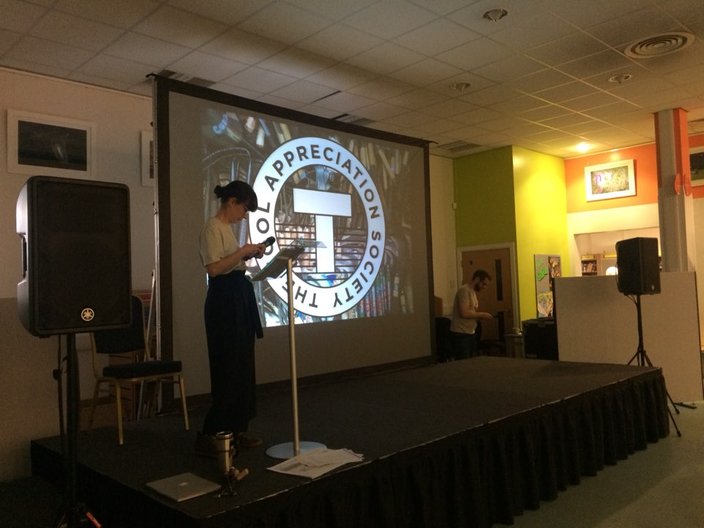 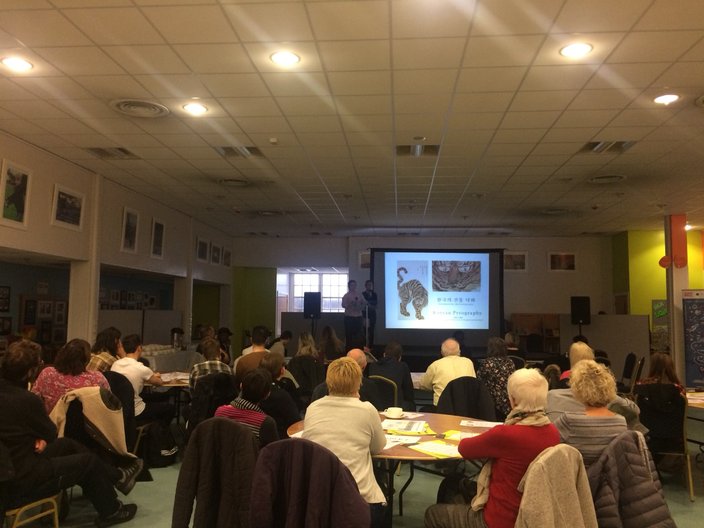 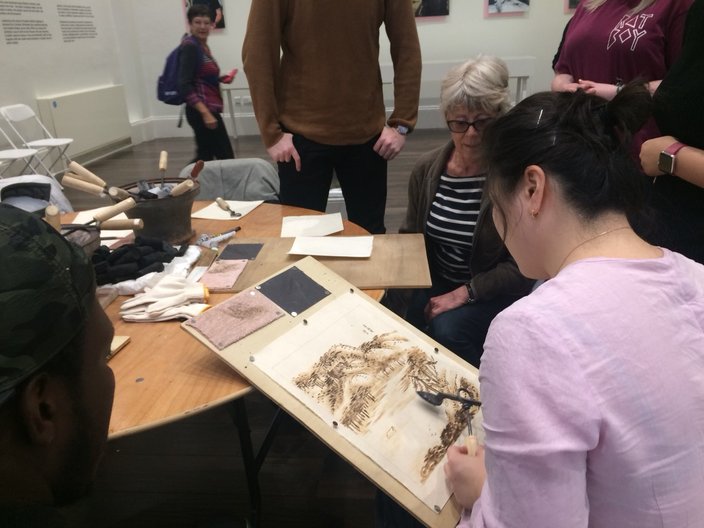 As part of the Hull City of Culture 2017 and UK/Korea 2017-18, the British Council are pleased to support the visit of the Cheongju Craft Biennale and Korean apprentice master craftsperson, Yujin Kim, to coincide with Linda Brothwell’s The Tool Appreciation Society exhibition for Hull Culture and Leisure Library Services. Through The Tool Appreciation Society artist Linda Brothwell explores the significance of craft skills and tools illustrating their value to our social, cultural and economic development.

The visit of the Korean team builds on Brothwell’s work - The Tools of South Korea and Hull – which was presented at the Cheongju Craft Biennale 2017 in the British Pavilion, Form + Motion coinciding with the exhibition in Hull. Her work was inspired by the craft and industrial heritages of both Hull and South Korea, two seemingly disparate places, united by the commonality of their craft stories, skills and tools. With support from the British Council and Hull Culture and Leisure Services, curated by Thirteen Ways, Brothwell has established an international exchange through tools.

Through conversations with makers and master artisans – from Hull, Jeju Island, Cheongju and Seoul – Brothwell pays tribute to their most important tools, immortalising them in exquisite cast and hand-formed models celebrating form, beauty and function. Building on these conversations, pyrographer Yujin Kim presented her practice in Hull. Coinciding with Yujin's presentation was the launch of the BBC Four documentary 'Handmade in Hull', produced in collaboration with Linda Brothwell.

Here we hear from Yujin Kim about her work in pyrography and her experience in Hull in November 2017.

You are the only apprentice of the only master pyrographer in Korea. Can you tell us more about pyrography and its history?

Pyrography is a traditional Korean craft which is done by decorating or drawing with a heated iron (brazier) on top of various materials such as wood, silk, leather, and ivories.  It is, in fact, not that well-known in Korea.  It’s been only around 20 years since pyrography has been recognized for its true value as a traditional craft, because there are only few people practicing.  Pyrography first started in China about 700 years ago and then made its way to Korea. The very earliest written record on the art of Pyrography is around 400 years ago, which documented a master craftswoman named  ‘Chang’.  Then about 200 years later in 1820 and 1850, Pyrography had become a great trend.  Changkyu Park was recorded as the master who had the best skills and even honoured by the King during the period.

Can you explain the system of intangible cultural heritage master craftspeople in Korea?

The government of South Korea has been protecting and fostering the crafts masters (individuals and groups) practicing traditional arts and crafts for the last 50 years via its national intangible heritage system. The intangible heritage is selected by a thorough and strict examination, based on very fine standards defined by national or regional level governments. Those standards include practical functionality, clear history, artistic values and genealogies.  Only an individual or a group that had passed such standard and examination is labelled as ‘intangible heritage’ and the ‘intangible heritage system’ provides a certain amount of funds to them so that they can pass down the skills to the next generation.

As one of the only remaining pyrographers, what are you doing to pass the practice on? Can you tell us more about your own work and how you got into pyrography?

Since I was really young, I had watched my dad working and practicing the pyrography. I majored in fine arts and design for my undergraduate and officially started learning (practicing) pyrography to become what I am today. It applies the same to all kinds of crafts, but to become a skilled masterperson, one must really spend a lot of hours on practicing and working.  Fortunately, I live with the national intangible heritage (my dad), and so I spend most of my time perfecting the skills and receive exhaustive trainings from him.  It all amounted up to vast time of practice and helped me with my work.

How do you feel about the extinction of some crafts practices globally in today’s world? Why do you feel young people no longer want to pursue these crafts? What can be done to encourage them?

Practicing craft is a really tough journey. One must endure the long and wearisome hours and hours of difficult tasks and work.  I can compare it to a mirror that you can see yourself in only after mopping it over decades. To endure such hard processes, certain conditions must be satisfied. First is the hopefulness and confidence on the future.  Second is the financial stability during the time of the practice. Nevertheless, these two conditions are very difficult to overcome. There is a policy and system from the government that makes it a bit easier, although very small in size and impact, for the young and passionate talents. It provides scholarship and stipend for students or assistants. I believe enhancing and enlarging such existing system will definitely help to produce more crafts masters and practitioners in the future.

You were recently involved in Linda Brothwell’s Tool Appreciation Society project. As part of this, you travelled to Hull as part of the City of Culture programme to deliver a workshop on pyrography. What was your perception of Hull? How do you think the workshop was received?

Just as Linda found interesting points when she first saw pyrography in Cheongju, I too had faced various feelings and thoughts when seeing crafts that don’t exist in Korea in Hull City. The crafts that had developed from the coast town especially felt very unique to me. In addition to that, the Hull city itself was very impressive in the way that it was functioning as a one big cultural space.   In South Korea, usually a big project like this is usually carried out in one specific space. Hull, using its various sites all throughout the city, for events and workshops was really interesting.  To me each event seemed to be well balanced and natural with the city’s own identity.

Another point that impressed me was the attitude of the audiences who participated my workshop. I could feel that audiences themselves were searching out for subjects and events that truly interested them. It made me happy to see the audiences participating with such focus.  I was greatly encouraged by their genuine interest.

How did you feel about the parallels made between craft from Korea and craft from Hull presented in Linda Brothwell’s exhibition? Do you think there are similarities?

I believe the core identity of crafts applies the same in the eastern and western hemispheres. Nevertheless, to watch at how certain crafts work had developed from completely different environments is a really fascinating experience. In such perspective, Linda’s work focusing on ‘tools’ really means a lot to me.  I could tell that the craftsmen’s mind-set and the meaning that they had given towards their tools were the same when comparing between Korean and British. I am deeply touched and empathise with Linda’s work that focuses on not only the ‘completed’ artwork but the beauty and meaning of the tools that completes the crafts.