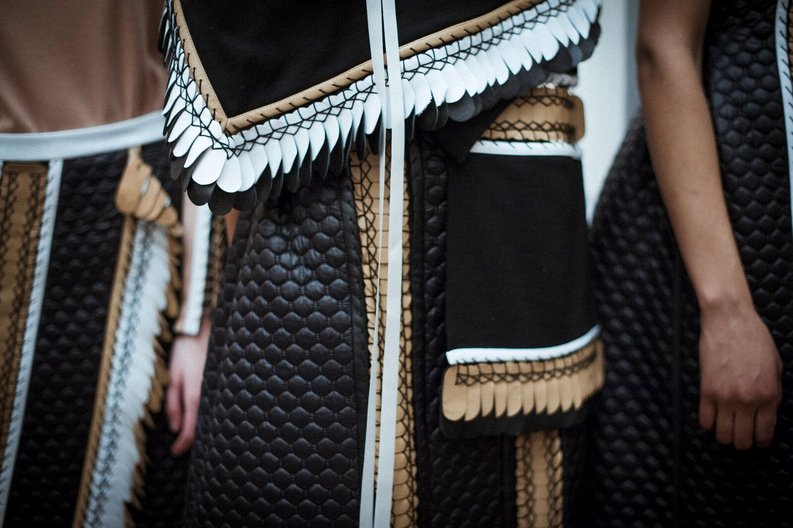 Hi! Fashion, an exhibition exploring garments from Japan and Ireland, will open at the National Craft Gallery in Kilkenny this weekend. Curated by Gemma A. Williams, this new exhibition will present womenswear and accessories that explore the visual correlations and contrasts between designers on the two islands.

Celebrating 60 years of sartorial history, Hi! Fashion will feature Japanese and Irish fashion side by side, creating a visual essay composed of juxtaposing garments. The exhibition unravels the cultural parallels and unspoken dialogues between Japan and Ireland. Drawing unexpected links between materials, techniques, and inspirations the juxtaposition of pieces from acclaimed Irish designers such as John Rocha and Richard Malone and Japanese visionary Kansai Yamamoto and contempoary makers Noritaka Tatehana is a truly global exchange.

The concept of Kanreki, which in traditional Japanese culture symbolizes the end of one cycle and the beginning of another, is used as a backdrop to explore the cycles of fashion in terms of inspiration and process.

During the 1980’s avant-garde Japanese designer Yohji Yamamoto sourced Irish cotton and linen from Irish mills, while Connemara featured as a location in his Ys campaign of 1998. Using street casting, his team travelled countries and cities following his philosophy of mixing womens and mens, anonymous and celebrity, asking locals to pose in his clothing and create his images. This exhibition echoes his idea of mixing, presenting Japanese and Irish fashion side by side, looking at how difference can be similar and how seemingly disparate cultures can be brought together through creative exchange.

Hi! Fashion will be open at the National Craft Gallery in Kilkenny  from 12 August - 12 November 2017.

Gemma A. Williams is the author of Fashion China, Thames & Hudson, and the former curator of Fashion Space Gallery, London. She consults to a variety of clients including Shanghai Fashion Week and sits on the mentor panel of the Design & Crafts Council of Ireland. Gemma has collaborated with the British Council on fashion projects with Vietnam and Ireland, she has also sat on the judging panel for the Curatorial Award at International Fashion Showcase.