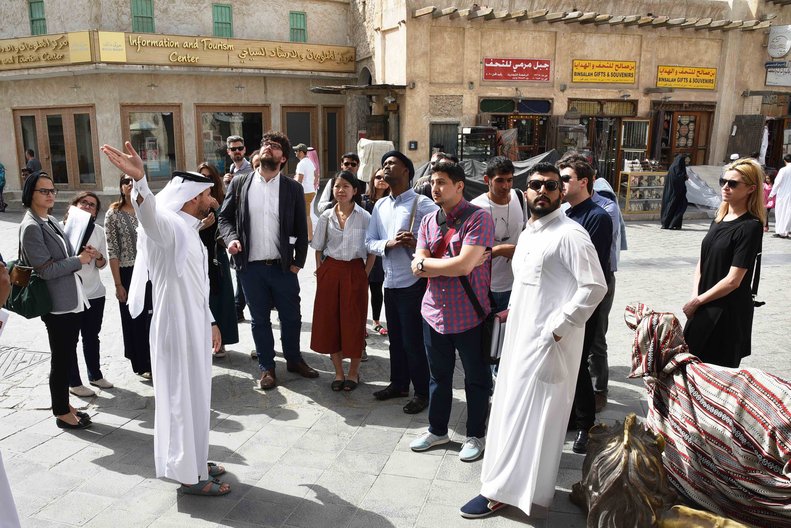 As part of the London Festival of Architecture, the British Council and Allies and Morrison have organised the exhibition Streets of Doha. Hosted in the gallery space of Allies and Morrison’s Bankside office, the exhibition draws on the work undertaken as part of the Unlimited Doha Design Prize, a ten day design-residency that took place in March 2016 in Doha, Qatar.

The design-residency was a unique learning opportunity that brought together UK participants with counterparts from across the Gulf including Bahrain, Kuwait, Qatar, and Saudi Arabia. Residents were a mix of architects and urban designers with specialists in archaeology, arts and cultural sectors and interiors and landscape design. This cross-cultural laboratory fostered collaboration and the sharing of research and skills, offering attendees the chance to explore current issues within architecture, heritage, urbanism and public space.

Allies and Morrison, whose widely praised work at Mshiereb Downtown, Doha, is also featured within the exhibition, was lead facilitator for the residency which was based on the theme of ‘The Open City’. Participants investigated issues related to the experience of movement and the design of public space. Working in teams they developed new ideas and design propositions to improve accessibility within emerging Middle Eastern cities and beyond.  The winning project, 'City of Play', was developed by a team formed of ScottWhitbyStudio (Alex Scott-Whitby and Cherng-Min Teong) from the UK, and Omer Can Aksoy, Gizem Kahraman and Deena Al Terawi from the Gulf who will have the chance to develop their idea further over the coming year.

The opening will be 16 June 6 pm
RSVP to rsvp@alliesandmorrison.com