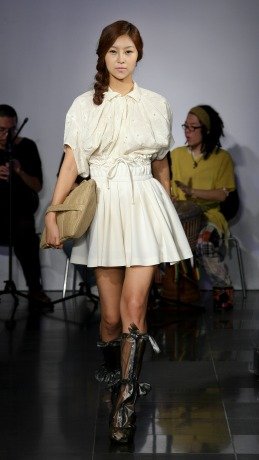 In 2005-2012, Sena Yoon completed a Fashion BA & MA in Antwerp Royal Academy of Fine arts in Belgium, followed by a Bachelor of Fine Arts, Hongik University in 2012-2014. Currently, Yoon holds an Associate Professor position at the Department of Fashion Design, at Sejong ,Sangmyung and  Kookmin Universities.

After participating in SEOUL FASHION WEEK-GENERATION NEXT in 2011, the “Soft core” bag & fashion label was launched in 2012, leading to the launch of the Eco fur label ‘Rose core’ in 2014. The Softcore collection was presented at SEOUL FASHION CODE in 2013-2014 and collaborated with Samsung on a NXmini Camera Bag in 2014-2015.

Softcore by Sena Yoon is showing as part of the International Fashion Showcase 2017, to find out more, click here.