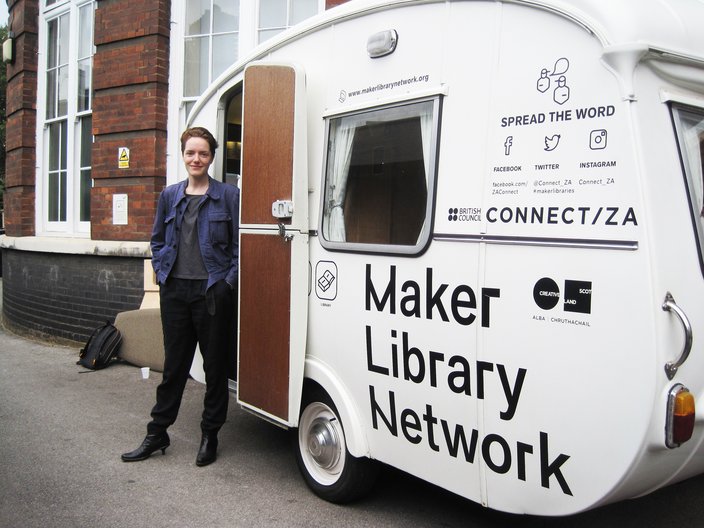 During London Design Festival 2014, footwear designer Marloes ten Bhömer ran a pattern cutting course for the Maker Library at London College of Fashion Gold Lane Campus. We interviewed her from the comfort of the Maker Library caravan parked outside, and asked her to talk us through her work and the role of making in her process.

Marloes mixes a wide variety of artistic and technological processes, construction techniques and materials, many of which are used rarely in the production of women’s footwear. Making is central to her process. Through hands-on experimentation and skillful production, she reinvents the construction process, opening up new aesthetic and structural possibilities, while also challenging cultural preconceptions about fashion accessories.

Marloes, tell us how or when your footwear interest started.

My BA was in product design, but two teachers with an interest in footwear taught on the course. One of them, visiting lecturer Marijke Bruggink, even owned her own footwear label at the time so it became a culture within my course that shoes were being made. It was a logical development as the department was also equipped with the machines to make heels, other non-textile making facilities, and also the structural understanding that is necessary if you want to do anything innovative or different with footwear. It became a culture and I just loved it.

Being a shoe designer allows you to deal with a wide variety of interesting topics, such as structural engineering, the value of making and how this is portrayed in the industry, the cultural importance of objects to women’s identities.

I am interested in the broader spectrum of meaning that shoes have. I covered this more and more as I developed my practice, continually broadening what I could do, from video work to writing articles about women and what they wear. So I’m happy I am focusing on shoe design.

Material Compulsion, a video work I produced with Noam Toran as part of the Stanley Picker Fellowship, and which was later shown at the V&A for London Design Festival, was a great project to work on. We shot the work in Kingston University with the school’s Phantom high-speed camera. After every take we had to have a big clean-up that got progressively worse. It started with beans, went on to goo, to treacle, to a sticky smelly heap of lard.

I studied for my BA at ArtEZ in Arnhem, a small and very good university which excels in Product Design and Fashion. I went on to the Royal College of Art where I studied on the Design Products course. A lot of people asked me why I continued my research into footwear design in that particular department, knowing that the Royal College of Art has a specialist shoe design program. But again, the machines and the structural and material knowledge were part of the product design discipline.

Through the department, I had access to the rapid prototyping and the CNC machine for the first time. On top of that, a few fellow students taught us how to work with modelling software. For the fashion students at that time, it was much less straightforward to access this knowledge and the machines.

Who has been your mentor during your studies or career so far?

Wilma Sommers, the head of the BA course I studied on, was my mentor; an eccentric lady who, unfortunately, passed away a couple of years ago. She was one of the few designers who looked at design in a broader way, beyond mere industrial good.

Thinking about it, when I graduated in 2001, the understanding in the mainstream of the scope and the value of design was much more limited than it is now. The value of product design is more than just economic, it has cultural value and an artistic value. Wilma saw that early on and professed this with heart and soul!

On top of that, most shoes refer to shoe types such as the Mary Jane, brogue or trainer. These types have very little to do with their original meaning and I am not interested in re-contextualising or re-hashing traditional shoes. My aim is to propose new aesthetic and structural possibilities.

When I first started designing shoes, I looked at Benoît Méléard’s way of disseminating his work. He was the first to present a shoe-only catwalk show during Paris fashion week in the mid-Nineties. Most footwear designers either show their work in a static exhibition or design shoes for a fashion designer’s runway.

Often when a shoe designer works with a fashion designer, the shoe designer gets called in when the fashion designer already roughly knows what his/her work will be like, making the footwear fit the clothes. But Benoît Méléard said that shoes are not just accessories, they are objects in their own accord. It was really inspiring to see.

Tell us about some of your collaborative projects. Who have you worked with?

My partner Noam Toran and I have worked together on three video pieces, one of the works is on display at Folkestone Triennial at the moment.

Again this was made on the high-speed camera like the Material Compulsions video, but this time references moments in cinematic history where a women’s mobility has been compromised for various reasons: to provide suspense, to bring about a character assassination, to satirise, to provide comedic relief, to silence a voice.

This isn’t online yet, I’m just working on it!

So far, where have you shown your work?

Well, the list is becoming quite nice, at the Crafts Council V&A Power of Making exhibition, Design Museum London, Spring Projects Gallery and I recently showed at the Stanley Picker Gallery as part of the fellowships. It was an amazing opportunity to produce a solo show with complete freedom. I recently showed at MAD in New York, in the exhibition Out of Hand: Materializing the Postdigital, which explored the many areas of 21st-century creativity made possible by advanced methods of computer-assisted production.

My work is often shown in shoe design, product design and fashion exhibitions that deal with footwear, the future of fashion, technology, craft and couture manufacturing and their cultural meaning. Also, lately I am asked to exhibit in art exhibitions, such as Folkestone Triennial, which allows me diversify the spectrum and scope of my work.

Can you tell us about some of your proudest career moments so far?

Being awarded the Stanley Picker Fellowship was an absolute highlight in my career so far. I have worked very hard to get to the ‘spoiled’ position I am in now that allows me time to develop work that is uncompromised and that really interests me. I have carefully separated the necessity to make money, from trying to sell the actual pieces that I produce.

The Stanley Picker Fellowship was an opportunity that allowed me time to explore, to read, to write and to test things out. It has helped me diversify my practice and has given me a better understanding of what I have done so far and where I’d like to take my practice. It’s very sad, but having time for research and reflection in design is definitely a luxury.

Even working in a gallery or museum setting doesn’t always allow for enough time to develop new pieces. I sometimes get the ‘can you do something in three months call, but to do something properly will usually takes at least half a year; to consider, to understand and for me, to make.

The way I produce my work is hands-on, I hardly ever outsource the actual making of the piece. Since being given the Nesta award, I have also always aimed to produce work that, although isn’t necessarily worn in the end, is structurally sound, really well-made and can last. If my claim is that the work I produce are not mere prototypes, then they have to be developed to this point, and that takes time. It can take me a year to develop one shoe, which of course is unusual in the footwear industry.

Are there any emerging designers you would recommend we keep an eye out for?

I find the hype around young designers very dangerous; it can be detrimental to people’s work. Those who do a project in university and get very well known for it and spend all their time exhibiting the work all around the world are at a risk of stagnating professionally. I’m glad I ‘hid out’ before I knew what I was doing and where I wanted to take my practice. Of course, I follow what is happening, but I tend not to be part of the boosting or the hyping. You don’t want someone who has just finished school to be too.