New Perspectives: A Celebration at Balfron 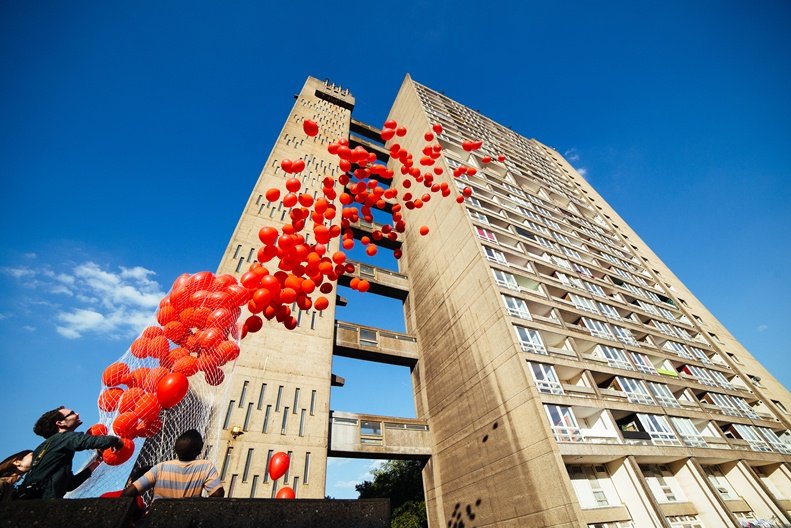 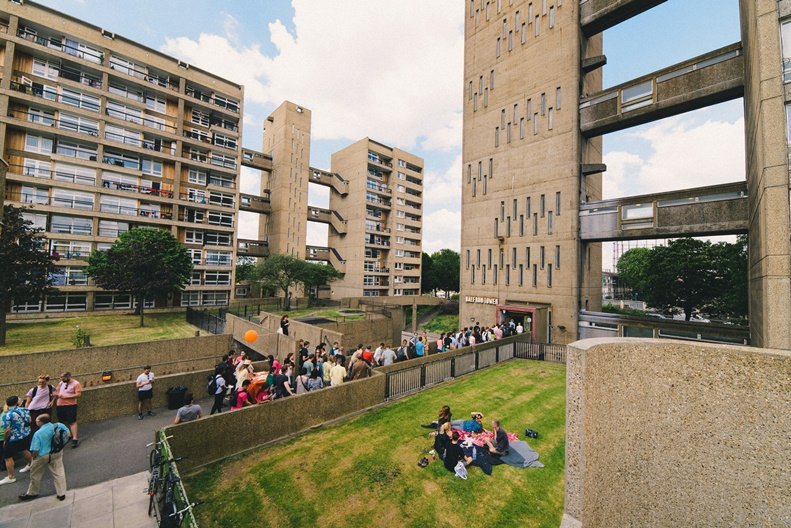 Queues form for the tower tours 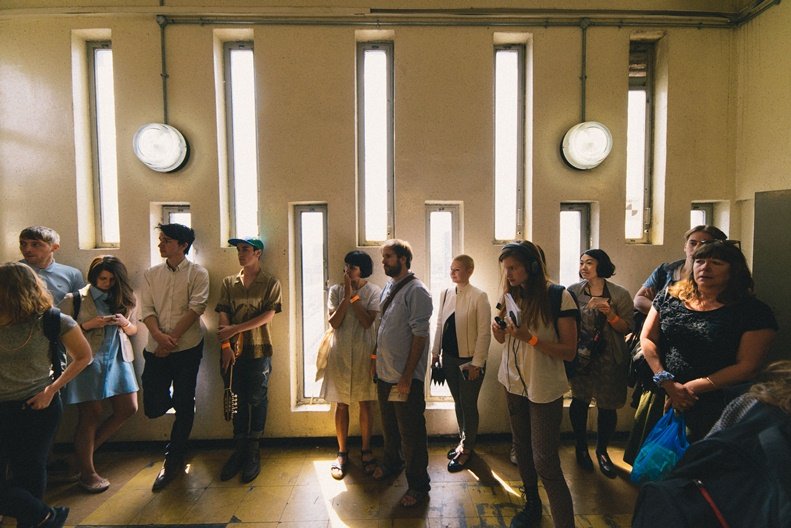 Inside the Balfron service tower 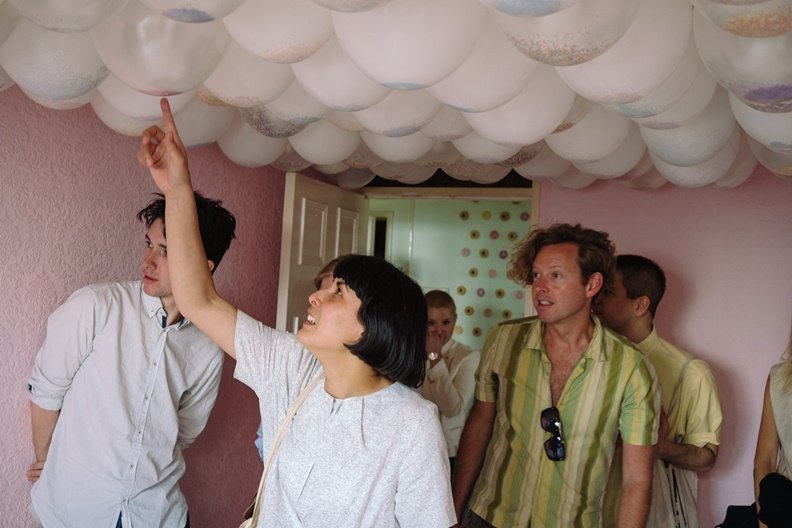 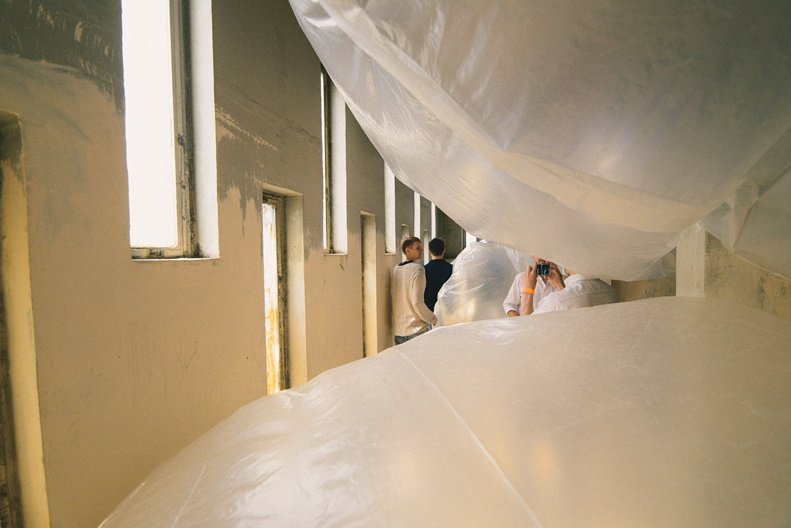 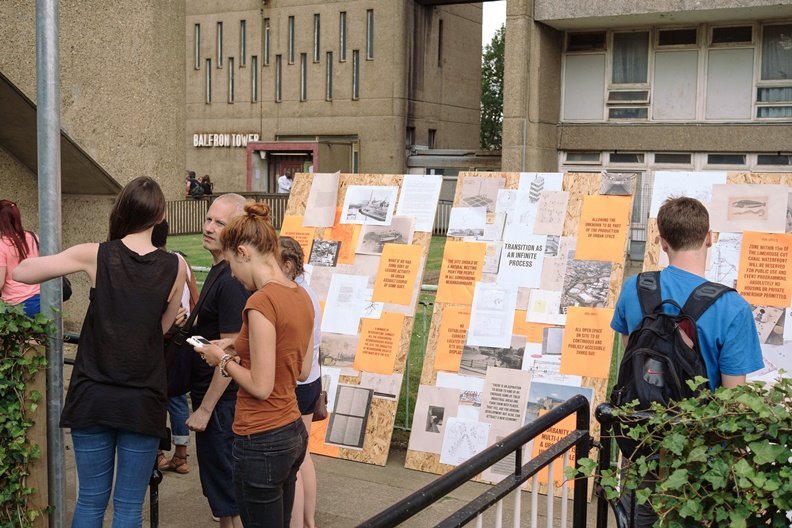 A preview of the programme's publication and chance to contribute. Designed by Joseph Pochodzaj and Commonland 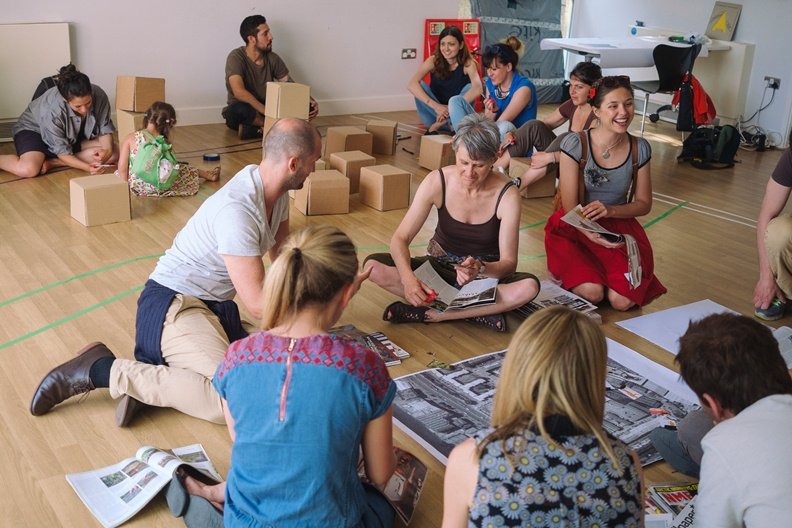 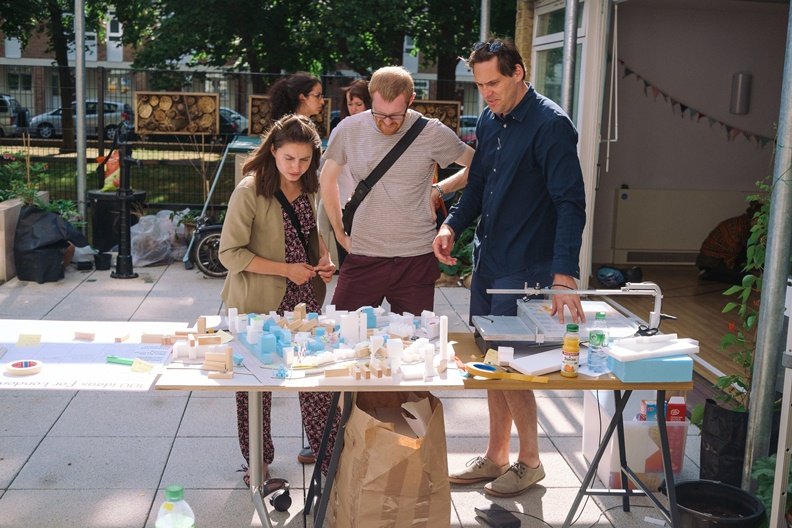 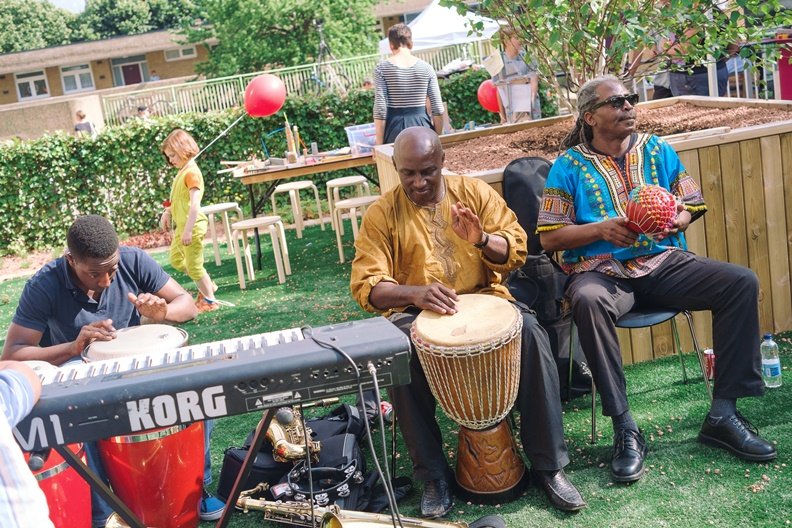 Local band the Awalas perform in the Community Garden 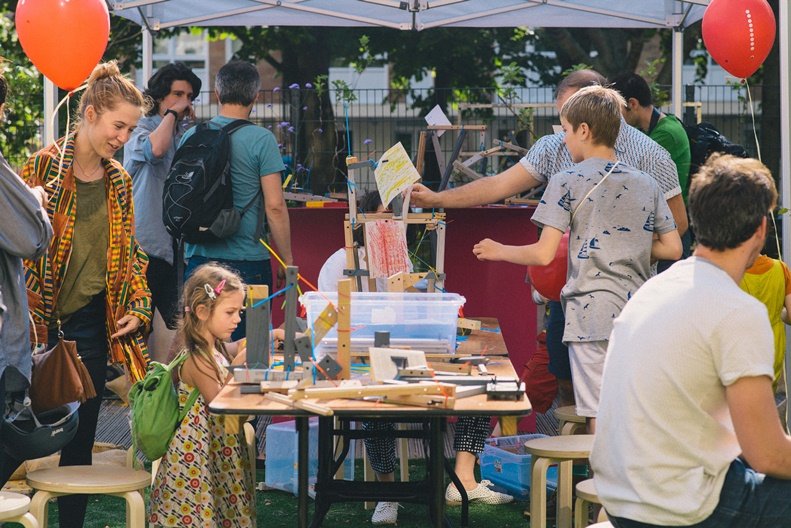 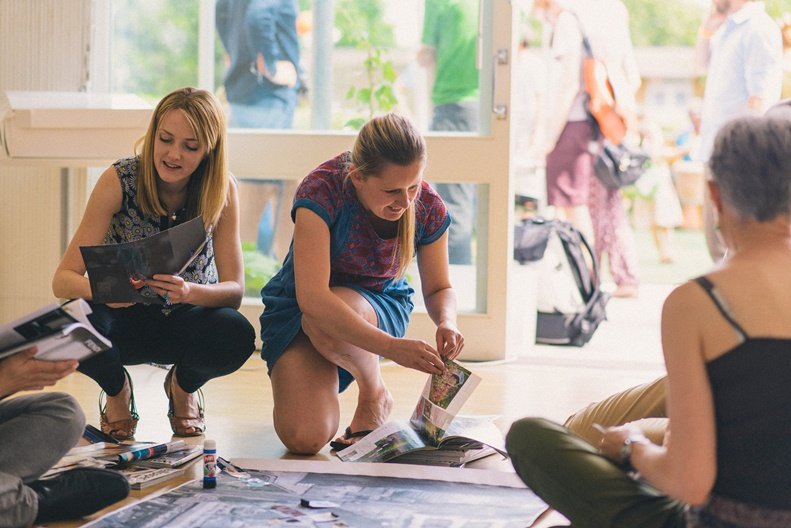 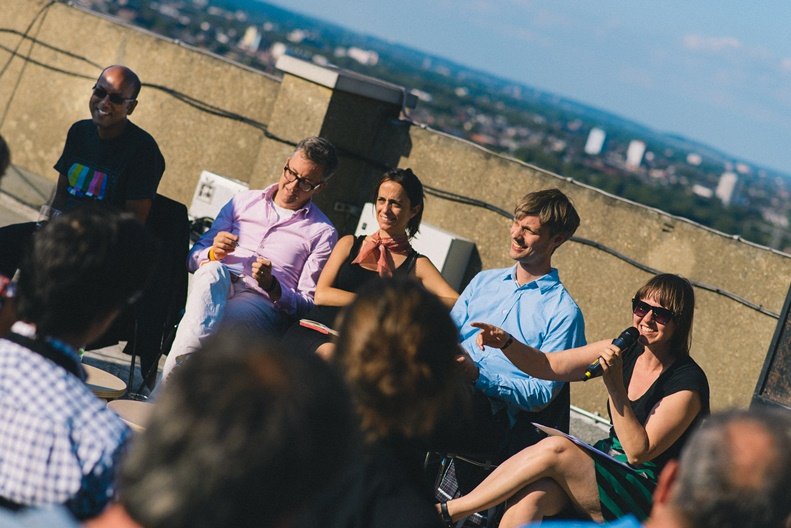 Roof panel discussion - International Capital: The Role of the Émigré in London 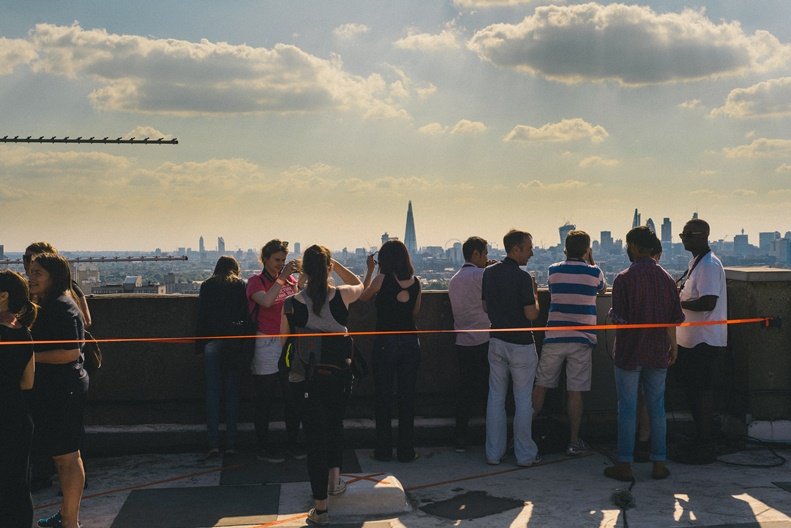 View from the roof of Balfron

On Saturday 21st June the iconic Ernö Goldfinger-designed Balfron Tower hosted a vibrant afternoon of activities, tours and workshops in celebration of the culmination of the International Architecture Showcase 2014, an architecture residency programmed by the British Council in partnership with Bow Arts Trust and curated by Moira Lascelles, taking place as part of the London Festival of Architecture 2014.

To begin the day the ten teams participating in the residency programme shared their ideas for Poplar in lively and engaging presentations, exploring unique approaches to the selected sites and themes. From ‘crisis towers’ to annual festivals on the Limehouse Cut, to rewilding parts of Poplar and suggestions for new modes of industrialisation; the scope of possibilities the architect’s defined exceeded expectations, reimaging Poplar with fresh eyes. Read more about the ideas generated here.

Populating the grounds of the tower, from the Community Garden to the Concrete Playspace, the architects extended their ideas further by engaging the public in interactive workshops throughout the day. From live drawing to model making, round table discussions and nature trails, the energy of the presentations were translated into an imaginative array of events with a backdrop of festivities including drumming from local band the Awalas and traditional east end food by Chrisp Street Market veterans Maureen’s Pie & Mash.

In addition to the architect’s workshops, South London based design collective Assembly ventured east for the day to explore the topic of waste in the creative industries with their engaging creative game Offcuts, proving particularly popular with local children and architects alike. Joe Pochodzaj & Kathryn Evans-Prosser of design studio Commonland also visually presented the showcase’s publication in-progress, asking visitors to give opinions and ideas to feedback into the finished newspaper, available soon.

Inside the tower the vertical carnival unfolded with tours by Ab Rogers through the immersive installations created by the Royal College of Art Interior Design students, including an edible apartment and inflatable structures that transformed the tower’s drying rooms. Adding a further dimension, the tours were animated by performances from beat boxer Reeps One and musician/poet Huw Olseker.

Taking full advantage of the beautiful weather, the day concluded with a dynamic discussion about the role émigré architects have in London and the importance of embracing international perspectives, held on the roof of the tower and complete with breath-taking views over London. The panel included Manick Govinda (artsadmin), Christopher Pierce (Architecture Association), Jonas Lencer (dRMM) and Paula Velasco (MoVe Architects, Chile) and was chaired by our director Vicky Richardson (British Council, Architecture, Design, Fashion).

At dusk, in a finale that summed up the energy of the programme and of the day, Delvendahl Martin and GAISS Architects released a flock of red balloons – the outcome of their workshop - into the sky to a captivated audience below.

We would like to thank everyone that took part and made the event so engaging and enjoyable.

View the full set of images taken on the day by photographer Mike Massaro on our Flickr.