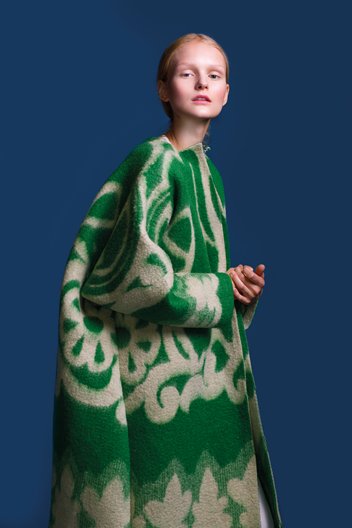 We are pleased to announce that from 13-23 February 2014, to coincide with London Fashion Week, nearly 30 foreign embassies and cultural institutes based in London will showcase the work of more than 120 designers - making it the largest exhibition to date. This season sees 180 The Strand become the central venue, housing 16 countries from four continents. From here, visitors can begin an international fashion journey through the city’s embassy buildings, cultural institutes and galleries to discover the work of new design talent.

The exhibitions trace themes and commonalities across a generation of designers who, using their cultural roots, traditional craftsmanship and visual culture speak individually in an international language of emerging fashion.

This year sees an Estonian designer transform blankets from Soviet housing into coats; Ñandutí lace used as a common inspiration for three designers from Paraguay; a presentation of Brazilian modernism's influence on a generation of young designers; and the three Central European countries working together to mark the fall of the Berlin Wall 25 years ago.

Full details of the IFS programme, including exhibition and event schedules, and details of particpanting countries and designers, is now available via the IFS2014 Guide.

The International Fashion Showcase offers a platform during London Fashion Week to emerging talent from across the world. Organised by the British Council and British Fashion Council, it celebrates fashion asculture and emerging talent as global. Since its inception in 2012 it has exhibited the work of more than 200 designers from over 40 countries.

The International Fashion Showcase reflects the international nature of London’s fashion colleges, catwalk schedules, press and buyers who scout in London for emerging designers. It is also the only London Fashion Week exhibition open to the general public.

For a chance to win VIP tickets to Vodafone London Fashion Weekend with £250 to spend visitors can enter a competition by posting a photograph that they feel captures the International Fashion Showcase with the hashtag #IFSpassport.