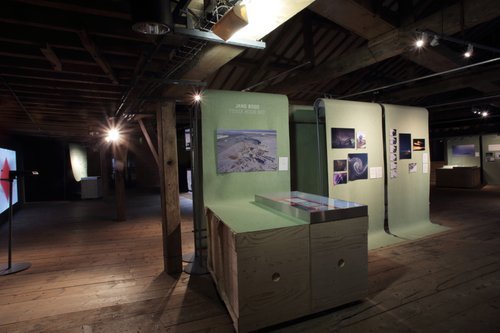 Ice Lab, Museum of Science and Industry. Photo by wearetape

Our Ice Lab exhibition has been now been extended to show at Museum of Science and Industry, Manchester until 2 March 2014 due to popular demand.

Ice Lab features some of the most innovative and progressive examples of contemporary architecture in Antarctica. These groundbreaking projects align cutting edge technology and engineering, with aesthetics, sustainability and human need.

Visitors can learn about some of the scientific research which takes place within and around the polar stations, such as collecting 4.5 billion year old meteorites which show how the solar system was formed, drilling ice cores whose bubbles of ancient air tell of Earth's climate history, and studying the Antarctic's Mars-like Dry Valleys.

They can also experience the Antartic landscape through two new artworks by Torsten Lauschmann, commissioned by The Arts Catalyst for Ice Lab, which use sounds, sights and sensations to evoke the disorientating Antarctic landscape and immerse you in a bewitching environment.

More about Ice Lab at MOSI and exhibition open times can be found here.