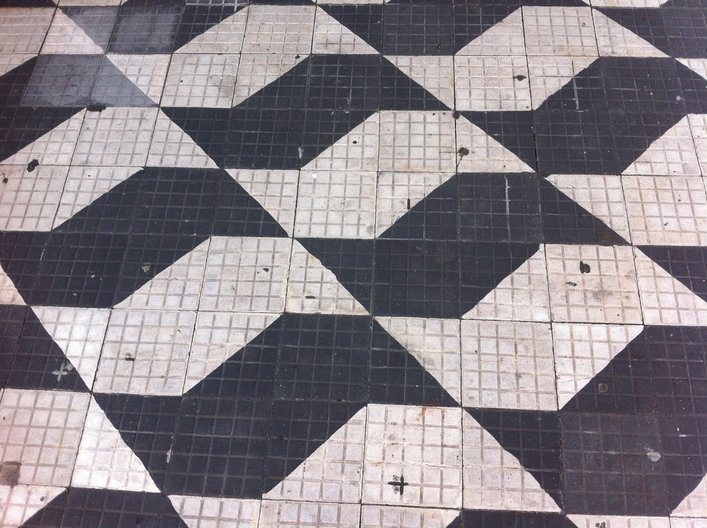 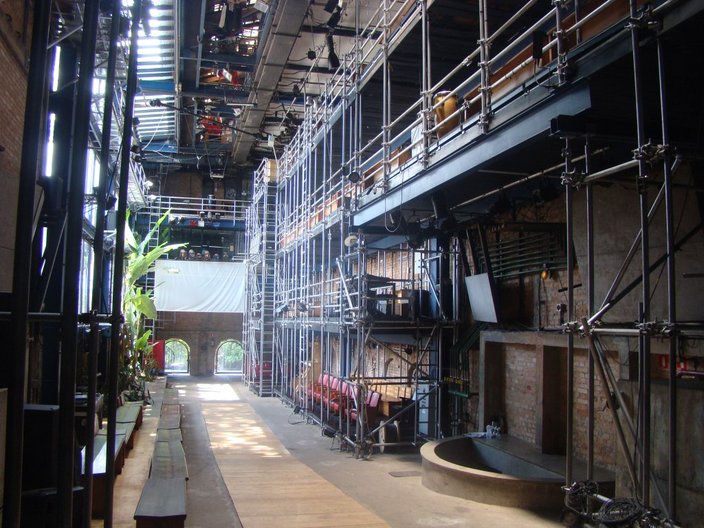 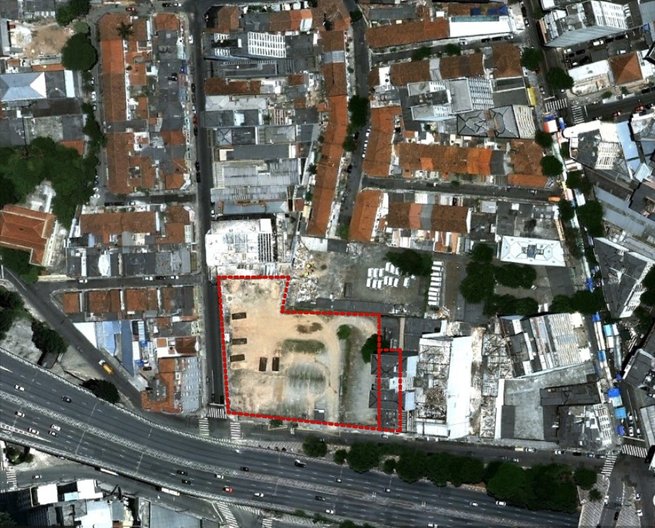 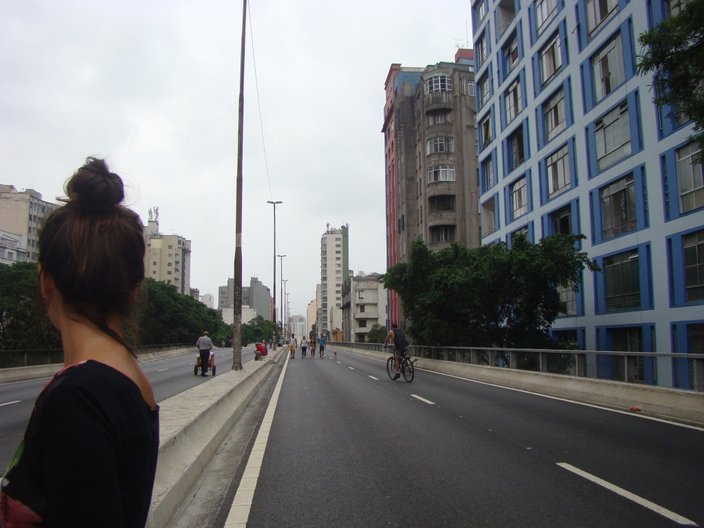 Minhocão on flyover on a Sunday 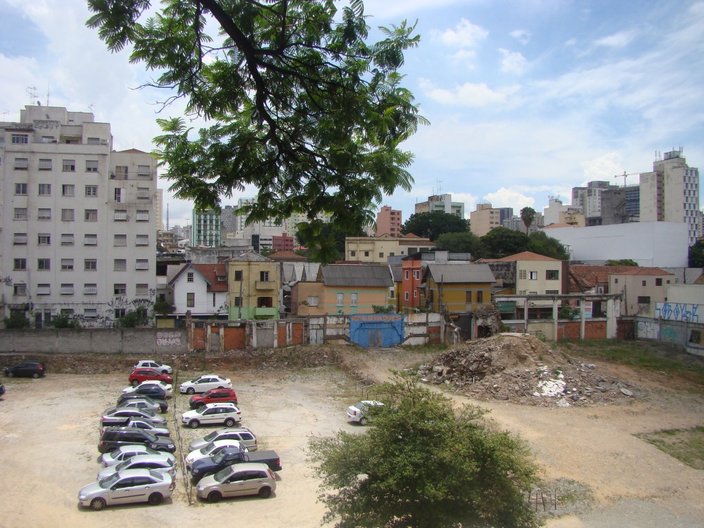 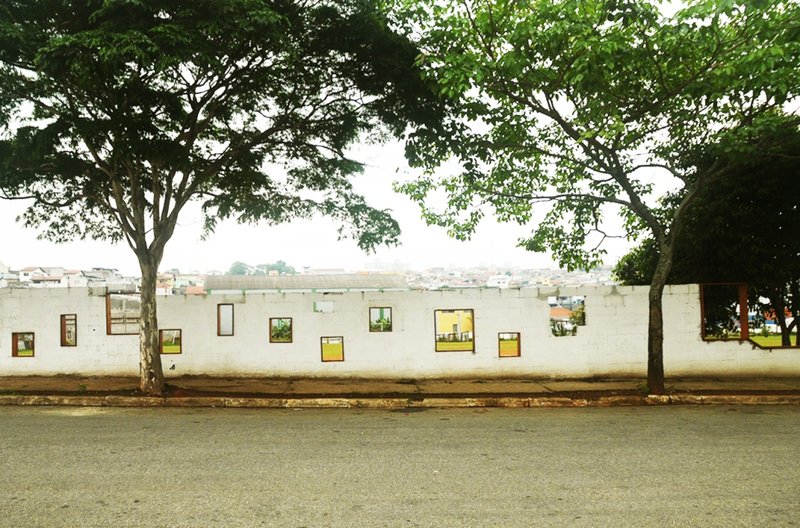 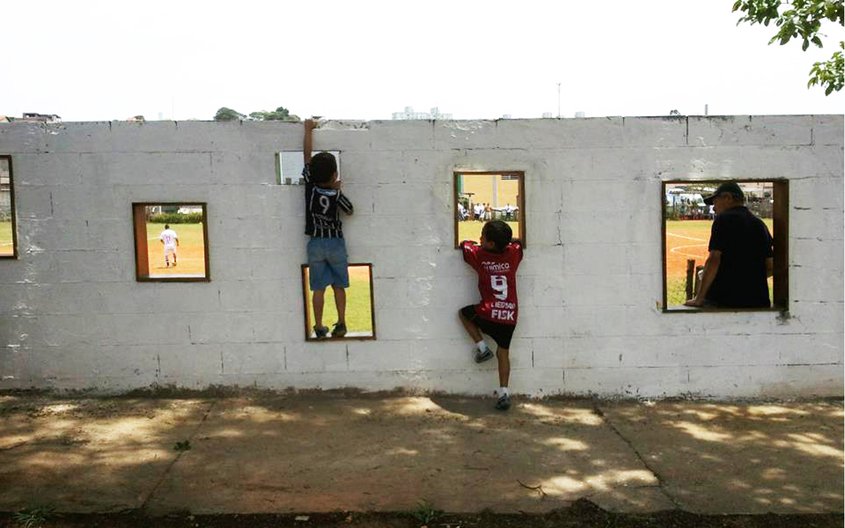 In her final report from Brazil, Laura Smith describes her discovery of Teatro Oficina, Lina's involvement with the theatre and the pressures coming from developments around the site. Laura also encounters an unlikely link between an empty plot of land in São Paulo, London's Robin Hood Gardens and this year's British Pavilion at the Venice Architecture Biennale.

It’s my second last day in Brazil. I take the 8705-10 bus from Oscar Freire towards Anhangabaú on my way to visit Teatro Oficina, a renovation project by Lina Bo Bardi. Whilst waiting for the bus, I remember witnessing the public protests mounting during my first visit to São Paulo two years ago. Amongst other things, people were unhappy with the lack of public transport infrastructure and the high costs of travel. Improvements have been made since. Bus shelters now have uniform graphics communicating service information instead of lamp posts with inconsistent signage.

On the bus, I stare out of the window, absorbed, as the city reveals itself. When talking to residents of São Paulo many claim their city is not beautiful, but I would disagree. I love the contradicting architecture set on a backdrop of tropical flora and bright blue sky; the politically charged graphic of pichação (a graffiti language developed in the 1940s) covering the downtown buildings and the black and white tiles arranged in the São Paulo State symbol running along the hilly narrow pavements that are frequently disrupted by the roots of a tree breaking through.

From República station I walk to the theatre, my route severed by multi-lane roads and intersections, reminding me that São Paulo is a completely different experience as a pedestrian. Teatro Oficina (workshop theatre) has the same modest signage since Lina’s renovation in the1980s and is hard to spot on the slip road next to a busy flyover. It’s an interesting part of the city’s pre-modernist two storey dwellings with small lane ways are dwarfed by the roads and tower blocks that surround them. The flyover, that later connects to the Minhocão flyover, has a string of redundant spaces underneath. Minhocão is one of São Paulo’s most famous and interesting public spaces. Having been closed to cars on weekends in 1976 and in the evenings since the 1990s, due to its close proximity to residential towers, it now serves as a promenade for pedestrians and cyclists after hours.

Inside the theatre I meet Rodrigo Andreolli, who has been involved with the theatre group for a number of years. He explains the history and ambitions of this very political space as we walk around the building. There is no stage as such, but instead a linear street-like timber path inset into the concrete floor runs the length of the building. There is also no front or back of stage, allowing the whole of the building to be part of the performance. Scaffolding extends down from the rigging to form an internal structure that holds the seating for the audience. We climb up and walk along an elevated platform that runs along a glass facade ten metres above ground level. From here we climb out onto a small balcony overlooking an empty plot. As with most vacant spaces in São Paulo, it is being used as a car-park as it waits to be redeveloped. It’s this redevelopment that makes the site so contentious. Rodrigo explains how for many years the theatre has been fighting plans for a high-rise development. It has resulted in the theatre becoming a listed building to prevent it being bought by the developer. Even so, if the development went ahead it would vastly affect the theatre and the local community. The opportunity to create a new type of public space would be lost. Lina herself had set out an urban strategy on how the theatre could grow over the years and become further knitted into the community. The ‘street’ theatre could physically connect to the neighbourhood’s lane-ways becoming public routes that would connect the larger site. Rodrigo points out painted sections on the walls surrounding the site, earmarking the location of these ‘gateways’. Over the years headway has been made. There is a possibility that if a similar site could be found for the development, the current landowner would release the site. This is an action for the local government and there is need for more lobbying from the public to make this a possibility.

From this vantage point I spot a mound on the site that has been formed from the demolition rubble. Steps have been cut into it leading to the top. The resemblance to Robin Hood Gardens mound in East London is striking and intriguing. Perhaps this is because it’s fresh in my mind from this year’s Venice Biennale British Pavilion and because of a recent education project we completed at the Architecture Foundation in Poplar where the group of young people created sound walks based on local stories and myths. I mention this to Rodrigo and he tells me that the mound was built by members of the theatre as a symbolic gesture of their cause. It fascinates me that the same symbolic typology for public space has sprung up halfway across the world with no direct connection.

The ambitions for the project and the use of architectural elements to communicate a wider concept remind me of another public space project in São Paulo called Tiquatira em Construção. It was a student project by Julieta Fialho and Andréa Helou who studied architecture at Escola da Cidade (school of the city). The project took an existing wall, which had previously closed off an interim public space from passers by, and made the wall permeable with a number of devices such as windows, furniture and planters.

It is inspiring to hear from so many Brazilians about their belief in the importance of public space, space where everyone can participate. It’s projects like these that are becoming a driving force for real change. The current Mayor of São Paulo has in the last year introduced new initiatives - people can submit their ideas for the city and, if successful, will receive funding or support to realise the project. The details have been consolidated on a user-friendly website which aims at being accessible to all. I leave Brazil feeling excited for the future. These self-initiated projects are a few examples of those working hard to promote discussion through design.

The Lina Bo Bardi Fellowship continues until 2016. Look out for announcements of the future rounds of applications.