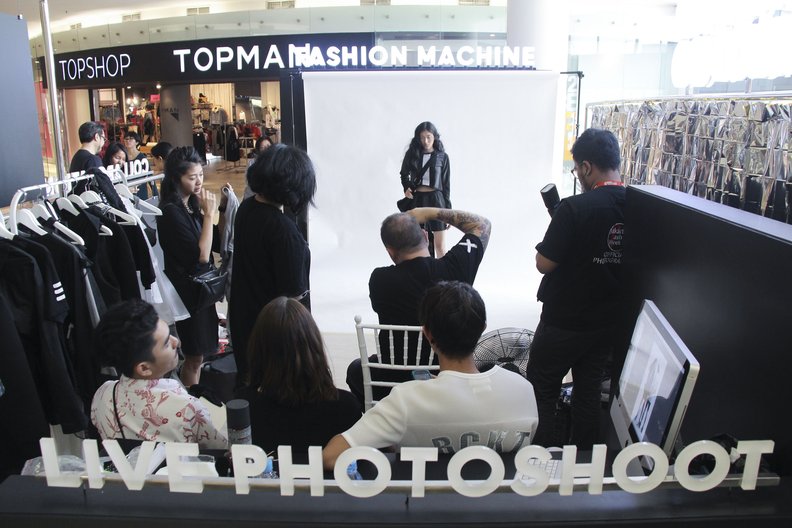 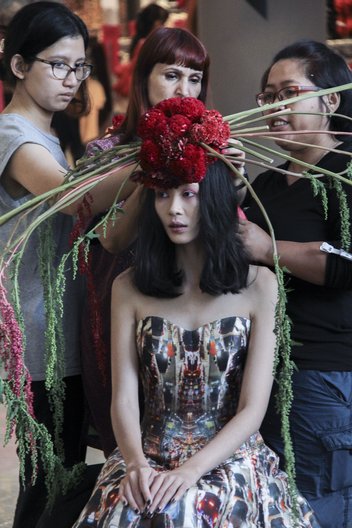 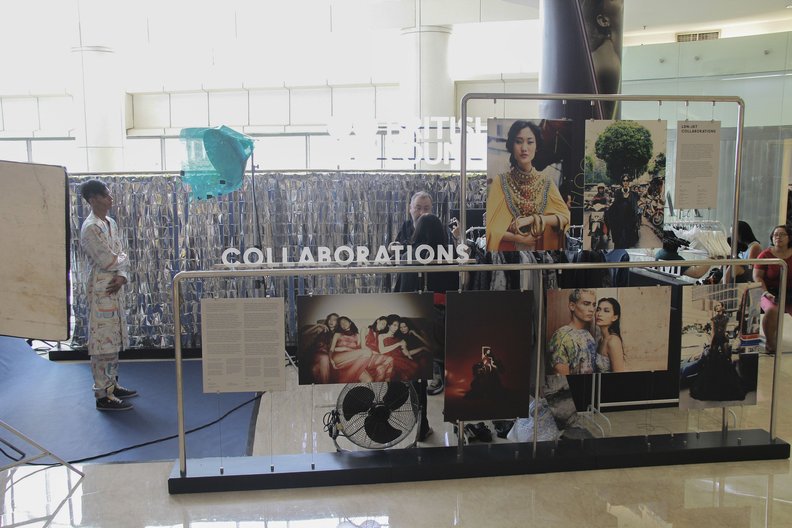 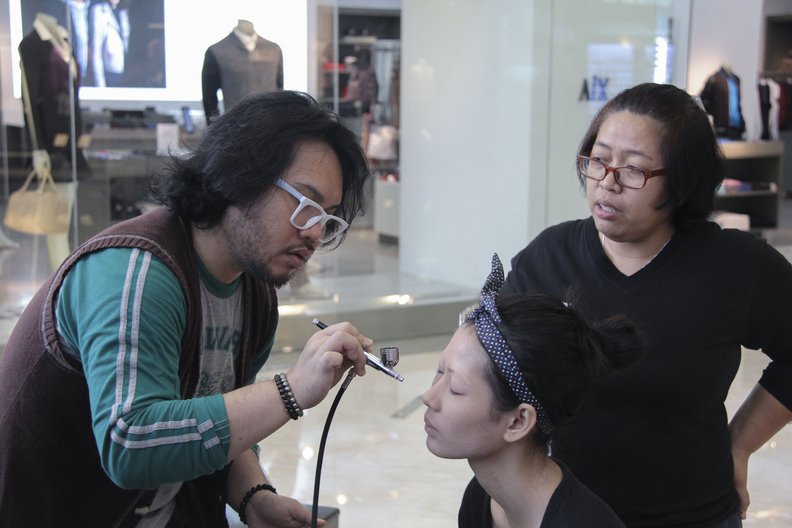 Hair and make up being done on set 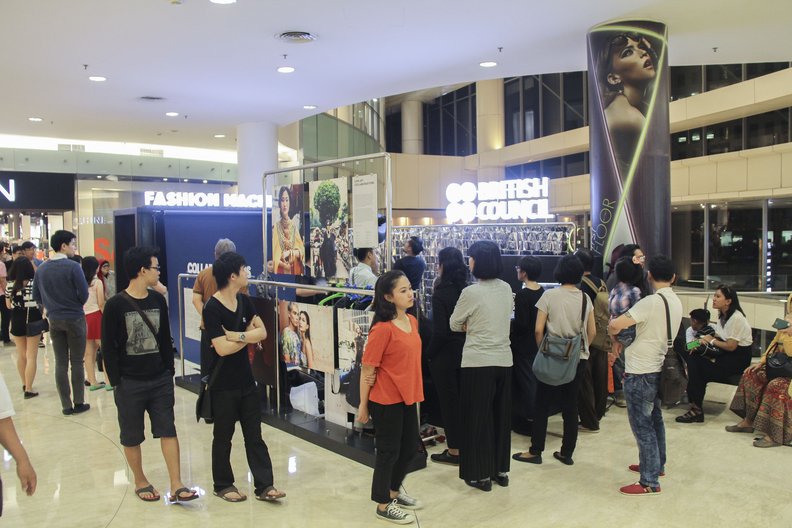 An audience forming around a shoot 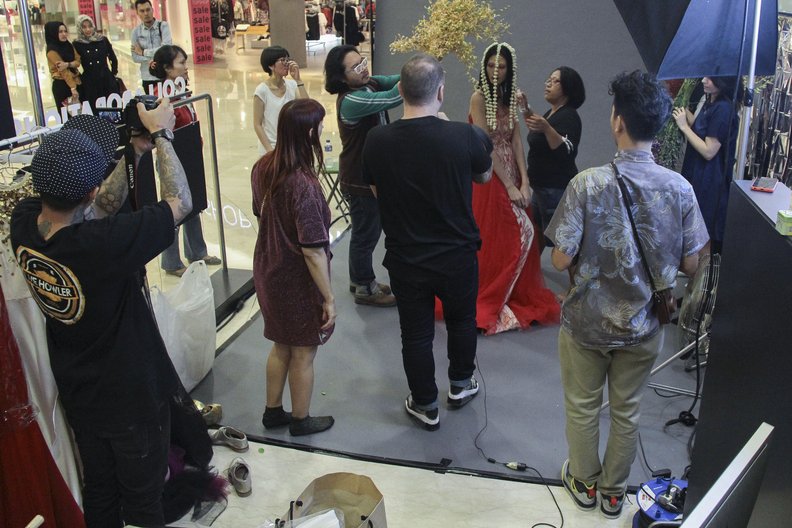 Adjustments being made on set

It’s our third year working with the ever-growing Jakarta Fashion Week in Indonesia. In addition to the Indonesia Fashion Forward Programme run by Femina Group and the Centre for Fashion Enterprise, the British Council supports the event through opportunities for young Indonesian designers to participate in creative collaborations with UK practitioners. In the past we have run fashion film workshops and exhibitions as well as the most recent fashion image-makers workshop with Rebekah Roy, Darren Black and Sarah May.

As a follow up to the Image-Makers workshop in June, we brought Rebekah Roy and Darren Black back to Jakarta to participate in our FASHION MACHINE programme. The FASHION MACHINE was a live collaborative editorial photo set running for the 7 days of Jakarta Fashion Week. Collaborating with designers, photographers, set designers, hair and make-up artists, stylists and models, this live event gave the public the chance to see what’s behind the fashion machine and how a fashion image is actually made. Emerging stylists and photographers supported Rebekah, Darren and their Indonesian collaborators chosen through an open call, including Annya Suhardi,  Intan Prisanti, Nadia Tirensia and Aditya Arnoldi.

A total of 8 editorial shoots were completed featuring the work of emerging Indonesian designers, which will now make their way into the pages of magazines in the UK and Indonesia. Collaborations included an editorial for the Jakarta concept shop the Goods Dept.'s Project K pop-up shop and an editorial with stylist Shinta Handamari. With Jakarta Fashion Machine situated in a mall the Fashion Machine was too, and it’s impressive to think that 8 completely different sets of images were produced in such a confining space – each made different through changes in lighting, clothes, models and set.

Designed by Csutoras and Liando with accompanying graphics by Laura Gordon, the set was encompassed by an exhibition of the collaborative work produced during the June workshop, including three films and campaign and editorial photography.

Jakarta is one of the most exciting new fashion cities, with numerous established and young designers, while London has a long history of producing many of fashion’s iconic images, edgiest magazines and innovative fashion films – from 1960s Swinging London’s youth-charged culture epitomised through films like Blow Up to the street style pages of 1980s i-D magazine or Nick Knight’s constantly innovative SHOWstudio, one of the earliest pioneers of contemporary fashion film. Through collaboration and exchange, we hope the two cities can share new ideas and explore the exciting visual language of fashion.

LDN-JKT Collaborations presents campaign and editorial photography alongside three new films. Together, these reveal the designer’s concept and variously celebrate movement, mood, the creative process, high fashion and the city.

In addition to the individual collaborations, Darren Black and Rebekah Roy were so inspired that they devoted an extra day in Jakarta to create an addi­tional shoot. The duo partnered with the fantastic team at Femina Group to create an exclusive editorial for the October issue of ESTETICA magazine featuring Indonesia Fashion Forward designers Jii by Gloria Agatha, Billy Tjong, Albert Yanuar, Dian Pelangi, fbudi, TOTON, Etu by Restu Anggraini, Batik Chic, Jeffry Tan and Patrick Owen. In this series, everyday glamour high-lights the exotic, tropicalcity as well as its buzz and excitement.