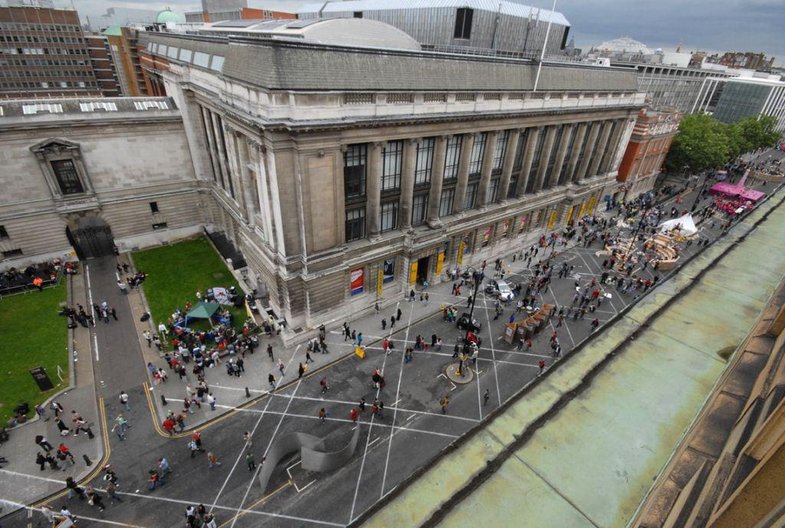 Matt Beavers, from British Council Germany, reports how Peter Murray from the London Festival of Architecture provides inspiration, and a few handy tips, to the organisers of Berlin’s first architecture festival.

It’s difficult to believe that Berlin, the self-styled European capital of cool and creativity, doesn’t have a festival for architecture. This is something that Francesca Ferguson, artistic director of Urban Drift, the Berlin-based trans-disciplinary platform for new tendencies in architecture and urban design, wants to change. With the support of several partners, including the British Council, she is working on developing Berlin’s first festival for architecture and urban design, entitled “Re_Sourcing the Urban”.

At a recent meeting, hosted by the British Council in Berlin, we brought together representatives of the Berlin architecture and design scene to meet and exchange ideas with Peter Murray, founder and director of the London Festival of Architecture, who has ten years’ experience of running one of the most successful architecture festivals in the world.

Peter explained how the London Festival was set up as a contrast to the Venice Biennale, where the world’s architectural community meet, but which has very little connection to the city of Venice itself. The London Festival, in comparison, takes its inspiration from and is very much connected to the city and its people, and from its founding aims to raise public interest in architecture, celebrate the architecture of the city and bridge the gap between the profession and the public.

Peter presented a number of examples of how the architecture festival has succeeded in gaining the public’s attention and then used the opportunity to introduce other themes relating to the architecture and planning. Most commonly, the festival makes use of public spaces, including grassing over streets, driving cattle down St John’s Street in Clerkenwell or sheep across the Millennium Bridge on the South Bank. These examples demonstrated how the structure of the city has evolved around its historical uses while at the same time giving the people the opportunity to experience alternative uses of city spaces and how streets can be humanized.

The festival makes frequent use of installations, taking over temporary spaces including a temporary lido in Southwark, a mobile pavilion for architectural debates, and the transformation of car park into a recreational area using sandbags (Oculus by Roz Barr Architects – see video http://vimeo.com/46357527). There are also walking and cycling tours, lectures and debates and a number of debates involving local schools of architecture.

For Peter Murray, one of the most important elements of the festival is ‘trying things out’. The festival provides a platform for testing ideas which, if successful, can become more permanent. The festival’s success in doing this is reflected in the fact that at least two of the festival’s initiatives, the sharing of Exhibition Road (see image) and a proposed tunnel in Hammersmith, have been adopted into official Mayoral policy.

Peter thus demonstrated to his counterparts in Berlin how an effective architecture festival can succeed in bringing together professionals, the public and policy makers to bring about positive change for the city.

This aim is shared by Francesca Ferguson who hopes that the Berlin festival “Re_Sourcing the Urban” will generate lasting results for the city. Unlike other Biennales, the Berlin festival will be characterised by its transdisciplinarity, involving not just architects and planners but also the design scene, Berlin’s rich contemporary art scene and numerous local platforms for social engagement.

The overall focus of the festival is the optimising and maximising of urban resources in times of financial austerity. With public services being increasingly cut back, so ingenuity, the optimisation of resources, urban resilience, public participation and empowerment are playing a more and more important role. Citizens are having to design or renew their cities themselves, with planners, architects and urban designers as the mediators who steer the process. Thus the festival aims to bring together a broad selection of these actors to discuss topics such as:

The positive examples from Peter Murray’s presentation only reinforced the organisers’ conviction that Berlin is really missing a city-wide architectural forum such as “Re_Sourcing the Urban” to spark a debate and promote positive change. The meeting between Peter and Berlin festival organisers thus provided encouragement and inspiration as well as a valuable opportunity to learn a few tips from the expert, who fully supports the Berlin festival. Peter Murray only had one word of warning, however. He advised not to organise the Berlin festival at the same time as the London Festival, as he wouldn’t want Berlin stealing London’s limelight!