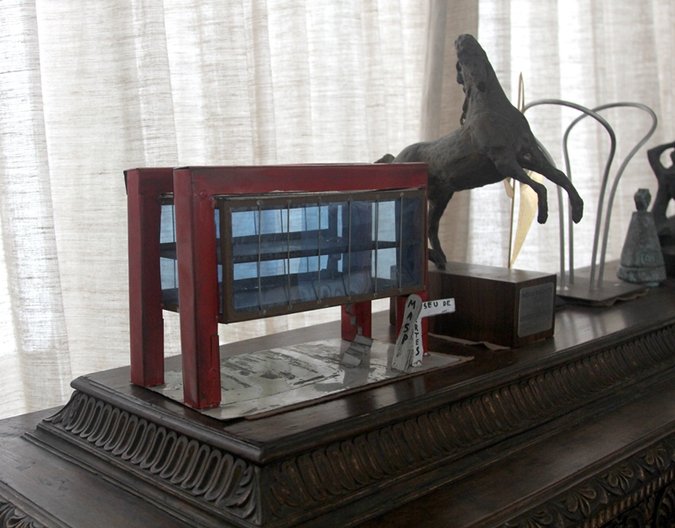 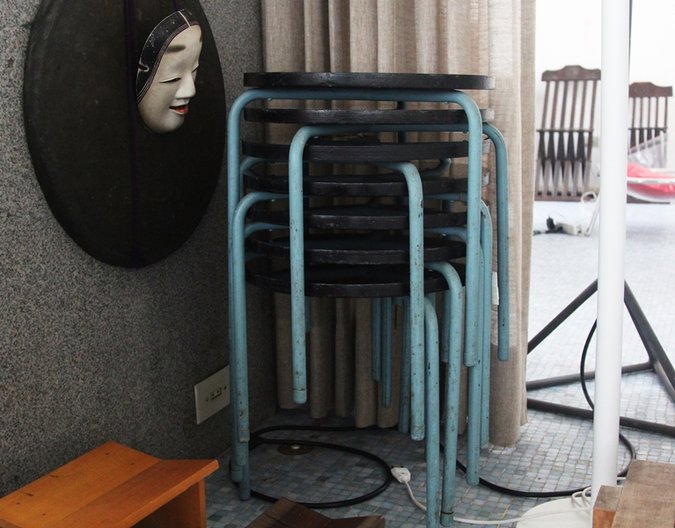 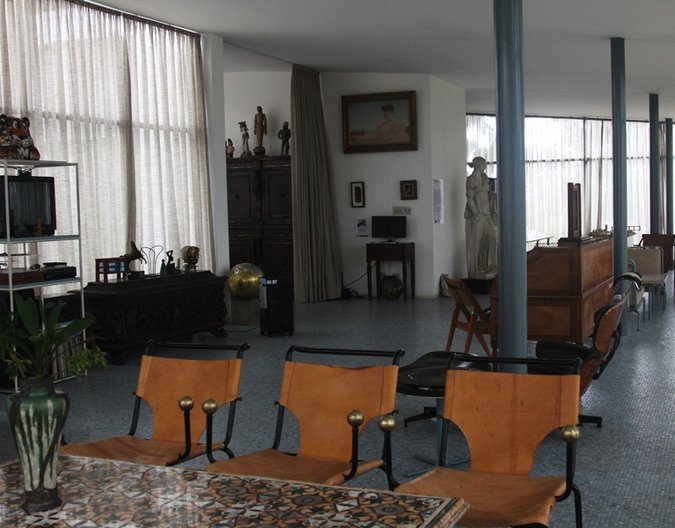 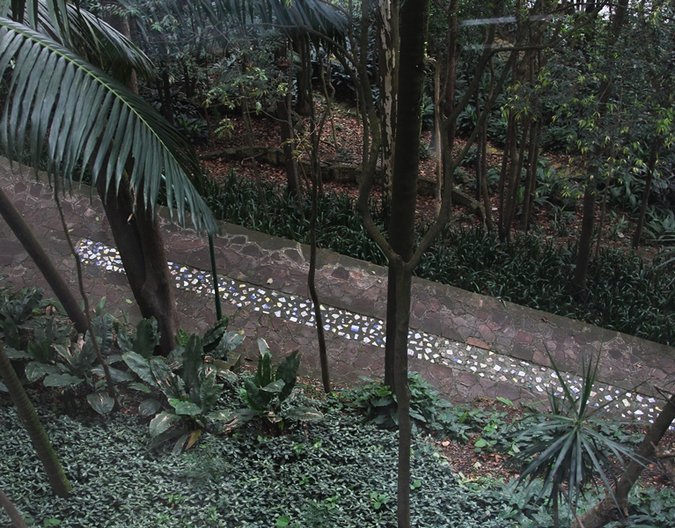 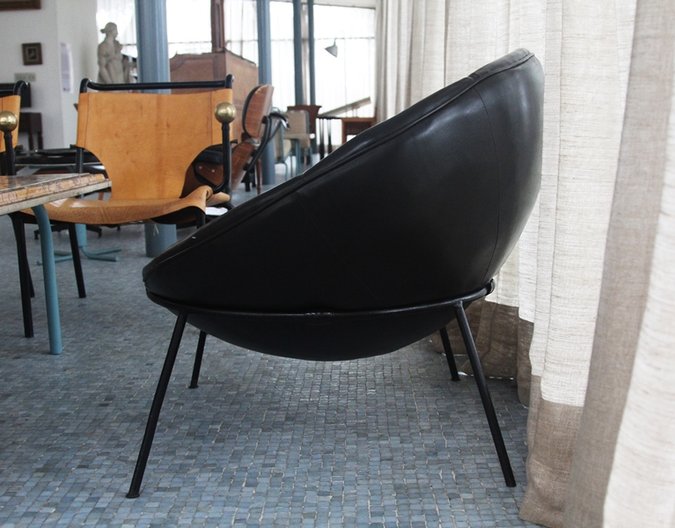 The first in a series of writings from Jane Hall, who is currently researching the work of architect Lina Bo Bardi in Brazil as part of a British Council fellowship. Visiting a number of Lina's buildings and archives of her work, Jane will explore Lina's intentions, and how they relate to and resonate in architectural education and young practice in Brazil today. Here Jane reports from 'The Glass House', which Lina designed as a place to live with her husband in what was then the remnants of the Mata Atlantica, the original rain forest surrounding São Paulo. The area is now the wealthy suburb of Morumbi but a more domesticated version of the rain forest has since re-established itself around the house, concealing it from view.

“Não é no Morumbi, muito mais ao sul”! The taxi driver deciding to ignore me, probably because of the frantic hand waving that accompanied the poor pronounciation, continues driving us along the infrastructural ring road that we are on, the Avenida Mouro, convinced it is in some way the same address as General Almerio de Moura, the small winding exclusive road that in fact houses Lina Bo Bardi and her husband Pietro’s Glass House - the road that I am looking for.

However it would be hard to mistake The Glass House, if you know vaguely where it should be, despite now being submerged in a dense covering of trees. As if to camouflage with the surrounding tree trunks, the gates are painted a dark green colour, and have the defining aesthetic of a Lina Bo Bardi project. A rich and extensive palette of textures and colours used most explicitly at SESC are repeated within the house, kind of a 1950’s feel, loosely reminiscent of the interior of Erno Goldfinger’s house on Willow road, or some of the industrial furniture designs of Jean Prouve. Walking up the drive, one immediately has a sense of the Bo Bardi touch, the hilly drive way is poured in concrete with brown oval pebbles inserted sporadically, but with evident care. At that time decisively Modern materials being used alongside those found on the site.

The ‘Other Glass House’ as it has been referred to can be considered a traditional exercise in Modernist Architecture. Le Corbusier was himself a visitor to the new addition in this Sao Paulan suburb, in fact The Glass House created the area that it exists in now. Morumbi is a wealthy neighbourhood with high gated walls that act as an antithesis to local planning laws, dictating that only lower walls should be built at around half a metre with railings or semi opaque fences allowed to rise above. Similarly the early Brazilian Modernists who built private houses in Sao Paulo’s own ‘Garden City’ areas such as Paulo Mendes de Rocha, propagated the low wall structure which have now given way to around the clock security measures, cctv and remarkably empty streets devoid of urbanity. Perversely the area is thus considered far more dangerous to walk around than most parts of Downtown. In this way the gated communities are in some ways a reaction to increasing dangers but also a significant contributor to the problems. The Glass House however appears to retreat from all of this, nestled high above in the trees that the Bardis planted to surround it.

Pietro Bardi opened The Glass House up as a museum of sorts in the mid 1990s. In doing so he donated Lina’s extensive hoard of documents, now being faithfully cataloged and turned into a comprehensive archive. “It was probably a good thing they didn’t have children” says Vivian, one of three part time archivists, “they wouldn’t have had any room - the archive is her child”. The archivists state that it is only in recent times that Brazil has started to really create archives and value much of the work that exists in estates and museums. The Instituto Bo Bardi faces a challenge to process Lina’s work in a way that does justice to her meticulous practice and evident dedication to recording her own work, with 7,000 documents, 15,000 photos all in addition to the video footage to go through. They even had to sell a Goya painting from the Bardi’s collection, currently the main source of funding, to allow the house to be maintained and open to the public.

And Lina would have liked this. She was a hostess with notable architects and musicians from the growing Bossa Nova and Jazz scenes frequenting the property throughout her time there. The main living space throws its welcoming arms out as one ascends the stairs from the belly of the house, confronting you with an entirely glazed facade that immediately returns you back into nature from where you have just left. This probably defines Lina’s work most clearly from her Modernist counterparts. One student, Ana Maria, who I met at The Glass House and is studying Lina’s exhibitions for her Masters at the famous FAU USP,  described Lina’s work as “Doing something different, something more experimental than the others, she both praised and criticised Niemeyer.” Another student from the relatively newer and innovative school in Sao Paulo, Escola Da Cidade stated emphatically that “Lina’s work was more about art, I am not that interested in architecture actually, Lina did something more like sculpture, I love her, I love her sensitivity”. It felt apt that this young architecture student would be saying this here, in the Glass House, a building more difficult to understand as a piece of socially conscious architecture, but one that is evidently subverting the rich and often dictatorial legacy of the Modernism taught in many architecture schools in Brazil today while still being a distinctly and truly ‘Modern’ building.

Lina’s archives are full of notes on teaching, cataloging everything from transcripts from classes, lists of students, payment slips and letters of appointment. Within all this are many lectures - all in Portuguese or Italian. I opted for the Portuguese and tried to determine what being in a class taught by Bo Bardi would have been like. I was surprised to find her repeated insistence on the study of history and of art, including a traditional and mostly philosophical list of books to be read and studied including Aristotle, Marx, Hegel, Alberti and Descartes. While respecting the traditional method of lectures and conforming to year long courses for university level education, Lina emphasised the directional nature and purposefulness of studying. Students were taken to workshops and places of industry where they were to study methods of production in order to create ‘machetes’ based on a project developed with a tutor, and supported by an assistant. She insisted upon the study of the arts, sculpture and textiles, including them in her list of skills to be observed and acquired.

Her lectures have a political and critical spirit, there is a sense of urgency to them, calling to the “Young Brazilian Architects to mobilise themselves to defend the values of folkloric culture”. She encourages the appropriation of traditional terms, re-defining them in new ways to make sense of what she refers to as the “historical present”; an understanding of current times through knowledge of past history and a reading of history from a stance in the present. In one interview, Lina describes the perceived dislocation between the architect and the reality of their own country, stating that this needs to be addressed through the organisation of schooling not just in Brazil, but also the rest of the world. She repeats her feeling that especially in Brazil there are an abundance of “fantastic, wonderful” possibilities, going on to call for a change in the teaching of architecture at a national level. She laments the lack of critical writing and the presence of a ‘great architectural magazine’ linking this with the problems of communication and the absence of a collective and moral approach.

Lina spoke about her belief that the role of the architect is very important, but as a figure who works for the popular needs rather than ‘a spontaneous architecture of discovery by the bourgeoisie’. Her message was that it was not necessary to be a ‘great office technician’, but somebody who travels around Brazil, not just to the capitals, seeing things and learning from outside influences. She makes a distinction between folklore and craft. Brazil being rich in the former but lacking in the sense of a valued craft movement which she stated depended on a “well defined social structure”. Through her many interviews, lectures and writings, Lina conveys a sense that Brazil must re-create a society through valuing and producing a new crafts movement by means of collaboration. To hopeful students and young architects she maintains that while it is their personal prerogative to decide the place of the architect, she encourages that their role must first serve the people and their practice be rooted in an understanding of the nature of Brazil in its entirety.