Curator in Residence at NID 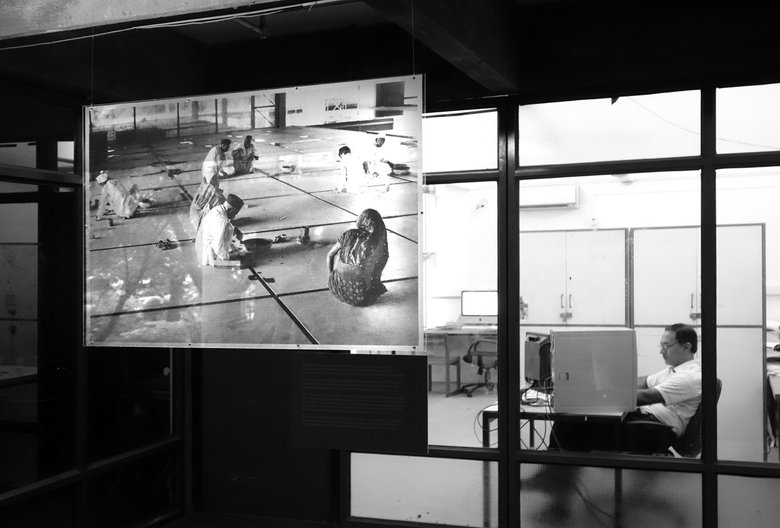 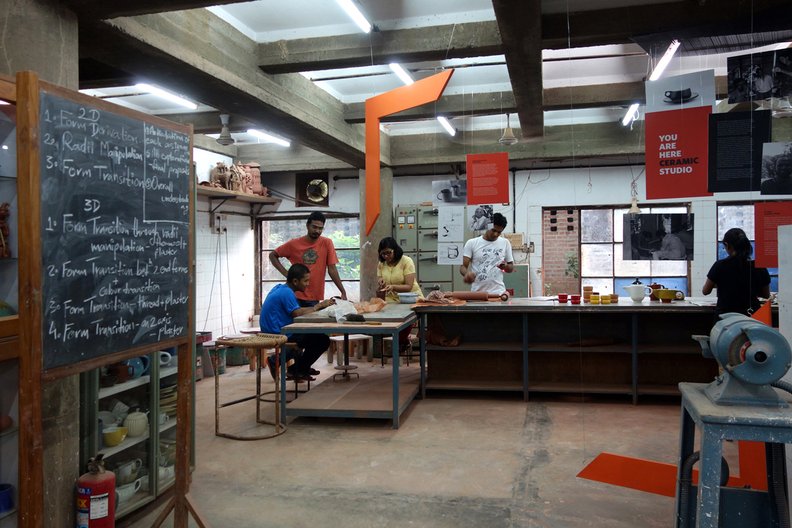 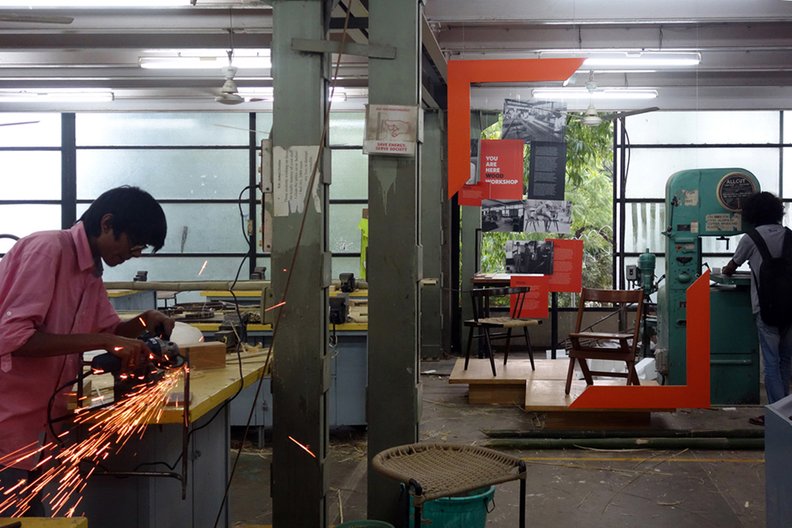 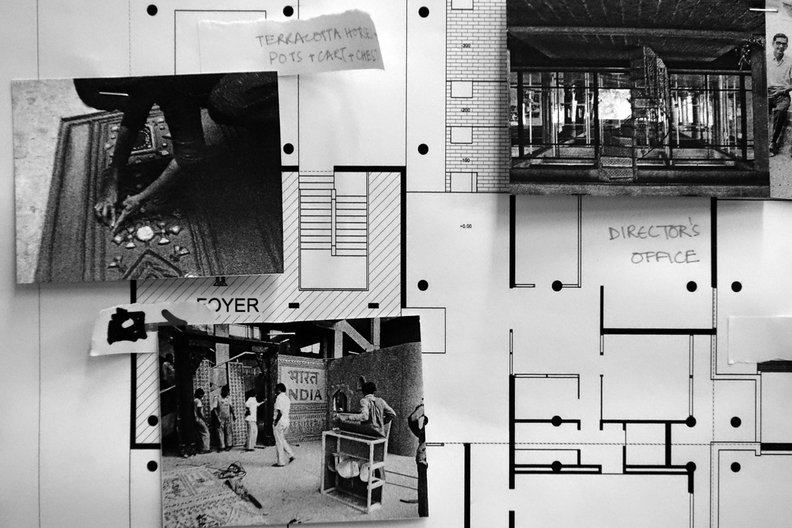 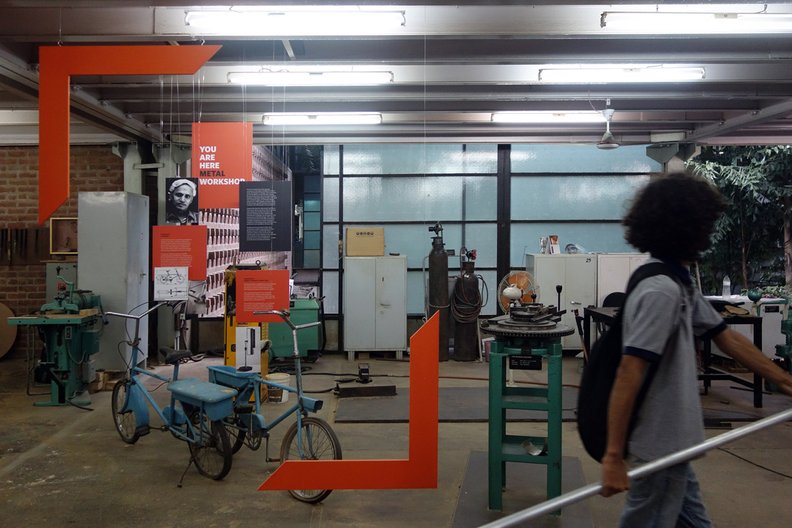 Tom Wilson spent August at the National Institute of Design in Ahmedabad as Curator in Residence following our open call as part of our Design Curation Programme in India.

Arriving in the middle of a torrential monsoon thunderstorm at 4am, I wondered what I’d got myself into when I’d applied to be the British Council’s Curator in Residence at the National Institute of Design (NID) in India. But any initial doubts I had were immediately dispelled by my very warm welcome at NID’s verdant campus in the middle of Ahmedabad’s urban chaos.

I’d arrived at NID to work with Exhibition Design and Graphic Design students to curate an exhibition for the Design History Society’s annual conference. It was the first time the conference had ever been held outside Europe, and appropriately the theme this year was ‘Postcolonial Perspectives: Towards Global Histories of Design’.

And NID is an excellent lens through which to consider global perspectives of design. Established in 1961, it was the first institution for education and training in industrial design in India, and it has a particularly interesting history in that Western ideas and principles in the teaching of design (especially those of HfG Ulm) were tried, tested and challenged within an Indian milieu. Shaped by global and local forces, NID was the ideal subject for our exhibition.

Our starting point was to consider NID as a palimpsest. Describing the way in which information is inscribed, wiped clean and re-inscribed onto the same surface, palimpsests provide a glimpse into the past while very much belonging in the present. We wanted to reveal partially forgotten layers within NID and to bring them to the surface in striking juxtapositions with NID today.

Called You Are Here: NID Traces, the resulting exhibition was experimental in its display, consisting of an open-ended and non-linear trail throughout NID’s studios, workshops and spaces. Around the NID campus, we placed large photographs taken in the 1960s (many of them newly discovered) in the same place as it stood today. And in the workshops, we displayed objects which were made in the very same rooms several years earlier. Visitors took home souvenir postcards, each depicting striking graphic representations of NID’s various departments and workshops.

The exhibits highlighted many of India’s most prominent designers including Dashrath Patel, Singanapalli Balaram and Gajanan Upadhyaya, and showed how NID sought to position itself in a rapidly changing post-colonial world. One object on display was a chair made to schematics drawn up by Japanese-American woodworker George Nakashima, which was batch produced in the NID wood workshop. The first chairs were made using rosewood, but subsequent batches were made using moulded plywood, fibre and even metal. Although the use of industrial materials appears contrary to Nakashima’s philosophy of truth to natural forms, the story behind the chair showed how NID sought to adapt Western ideas for specifically Indian needs.

The quality of palimpsest is also found in the human mind, composed of layers of memory. Much of the information presented was collected through conversations with faculty and technicians, some of whom have been at NID for many years. Accordingly, we made sure that technicians were on hand in the workshops in order to answer visitors’ questions and to tell their own stories. It was very important to us that there was an oral component to the exhibition, to reflect Indian ways of sharing and passing down stories.

From the outset, we wanted to question what it means to display objects in an Indian context. Students developed a striking exhibition design which ‘framed’ the workshops and actively encouraged visitors to step through and take a closer look at the exhibits. And when brainstorming the exhibition design, one of our ideas was to have human signposts throughout the campus. They would say something about that particular area before pointing the way to the next exhibit. After all, finding the way in India is mainly done by asking for directions. In the end we didn’t do this (for obvious reasons) but the idea showed how students were constantly engaging with Indian ways of telling stories and trying to build such questions into the very design of the exhibition itself.

A few weeks ago, I was invited to Mumbai to take part in a talk with Ruchita Madhok of Kahani Designworks, and a contributor to the British Council’s Creating Change project. We discussed the value of design stories in India today and shared our experiences in exhibiting and writing about design. I said I was convinced that design stories can point the way towards new ways of understanding India past and present. Crucially, these stories needs to draw on and take inspiration from India’s strong spoken traditions and of shared social experiences. And judging from my experience at NID, the potential is there to develop new and exciting ways of telling these design stories.