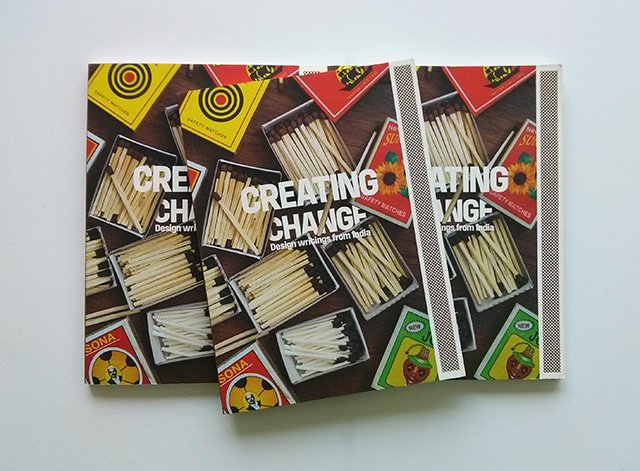 William Shaw travelled to Kyoorius' Design Yatra at the end of August as part of our Design Writing Programme in India. The publication is now available to download here.

I'm writing this on a Saturday morning in Goa. Onstage yesterday in front of around 1,000 delegates to Designyatra 2013, a group of design writers stood, applauded loudly by around 1000 delegates. We were celebrating the launch of a publication they'd written, Creating Change. They deserved every clap they were given.

The publication is the culmination of an intense four-month-long project that started in May 2013 with a series of one day design writing workshops.

I'd been asked by the British Council to facilitate them. The thing about workshops is that you never know what they're going to be until you get there. The one fact I knew in advance was that there was clearly an appetite for them.

Originally the council had planned two one-day workshops for a maximum of 20 people each, one in Delhi, one in Mumbai. In the event they were inundated with applications and within a few days the Council had squeezed in a third session Bangalore, making it a hectic dash from one city to the next. On each day we busted the 20 limit.

So what were these workshops going to unlock? To begin with I concentrated on writing and reporting exercises. All fine and good.

But then towards the back of the sessions we concentrated on pitching ideas for design writing articles. And that's where these workshops started to really get interesting. In a quick twenty minute download, the ideas poured out. The history of textile design in India? A examination on new shared urban workspaces? The evolution of Indian jugaad culture and design? The floodgates opened...

Cutting to the point. These sessions were clearly going to be as much about the skills needed as about finding the opportunities to publish this stuff.

India is a place of uneven distribution in more than one sense. The design stories that are waiting to be written aren't matched by the number of outlets. Nowhere near.

There are already vibrant industry-based design magazines – notably Kyoorius, who were co sponsors of these workshops, but also smaller ones too like Pool. But outside of those, the opportunities to publish are limited. Yes, there are some academic publications and the occasional creakily consumer-focused newspaper article, but little beyond that.

Why? Some of this could be a lack of self-confidence, people suggested. We don't realise the value of the stories we're sitting on. Part of it is in the nature of the country. The design communities are silo-ed in different cities. And even within those cities there is often little in the way of shared space. Outside of events like Designyatra there aren't enough opportunities for designers from different disciplines to meet. For information designers to rub shoulders with architects. For typographers to chew the fat with product designers.

Of course publications are a shared space. That's why they're going to be so vital.

So it was great that the second focus of these workshops was to produce a publication of our own. At the end of the workshops the British Council's Aanchal Sodhani and I asked for the attendees to pitch ideas for a publication.

Almost half of them did. Over the coming weeks we whittled down those ideas to a dozen. And then we worked on those articles with the writers. The British Council lined up three online workshops with Shumi Bose of Blueprint, Patrick Burgoyne of Blueprint and Robert Wilson of Uncube. We drafted and redrafted.

The result is Creating Change – published for us by the very kind guys at Kyoorius. It's a great way to understand the dynamism and the dilemmas facing Indian design. Some of it's about the past – how we got here; from a history of what design means in India right now to a review of how the modern and the traditional have continually tussled over Indian textile design. Then there are articles looking about what's happening in design right now in branding, in music industry and in India's startups. But it's also about the world of what's happening in India as seen through the eyes of designers – from the evolving comic book industry, to Delhi's troublesome rapid-transport scheme, to education and an amazing conservation project.

What it really shows though is the potential. The publication's designer very cleverly riffed on Indian matchboxes for the cover image. Maybe that's what this is. It would be a little arrogant to claim it as a firestarter, but perhaps it's one brushfire among many.

Because hopefully this is more than a one-off project. This is part of a much wider change that's already taking place. It just needs to make the spaces in which to tell its stories.