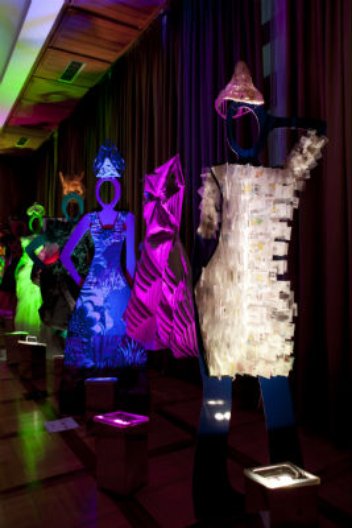 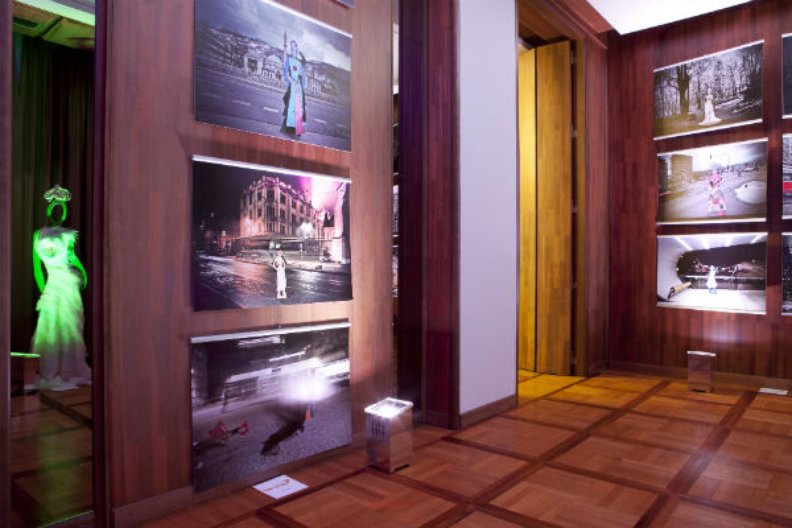 It is fascinating to see the work that is coming out of a country with such a recent traumatic history. This art-fashion installation produced by the Sarajevo based creative collective Modiko, is a testament to how talent and creativity cannot be suppressed despite the barriers faced. “Express yourself, no matter how hard it is.” (Gasha Miladinovic, Principle coordinator)

From a city where fashion isn’t even an option to study at university, and most young fashion enthusiasts tend to opt for product design as an alternative, it is remarkable to see the level of skill and design showcased here. Fashion in Bosnia is currently considered somewhat pointless, “it is surreal to do fashion in a country with so many problems” remarks Miladinovic.

This idea of the surreal is reflected in the layout of the exhibition – there is a childlike quality represented in the display of the work on 2D figures, they have cut-out faces much like those found in old seaside arcades – so that the observer is encouraged to participate in the installation. This idea of the 2 dimensional is key to the way Modiku wanted to express the view of fashion in Bosnia, “in a transitional post war country fashion is often thought of as being very 2 dimensional”. It is obvious that this is a prejudice Modiko are keen to change.

For this reason they have chosen to link up with a film director to create the first ever Bosnian fashion film. The film industry in Sarajevo is much more respected therefor it is a good way to bring their ideas to a wider audience and to garner some much deserved respect.

It obviously means a lot to all of these creatives to express themselves and to be heard. They see fashion as a way of communicating not only to the rest of the world but to the people in their own country too, and to show them that fashion can often transcend language or social barriers and be used as an important tool for expression in the same way art and film are.