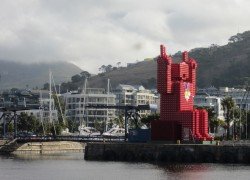 In February 2013, the British Council’s Arts team invited a group of curators and designers to visit Cape Town and Johannesburg, in preparation for Connect ZA, a cultural season dedicated to connecting young creatives in South Africa and the UK. Tom Porter and Sarah Mann guided partcipants through the urban cultural hubs to get a feel for the local scene. The team included curator Catriona Duffy of Panel, designer Mil Stricevic, architects Stuart Falconer of GRAS and James Binning of Assemble and Daniel Charny, director at From Now On.

Inspired by the energy and entrepreneurship of the emerging creatives met by the team, amongst whom were Nkuli Mangeli, Thingking, Alphabet Zoo and Heath Nash, Daniel Charny pitched an idea for a programme that would both support and enhance local activity, while connecting with the UK design scene.