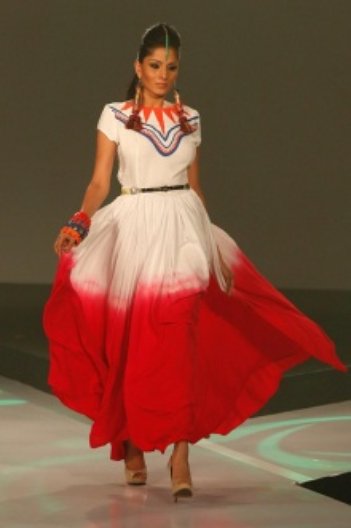 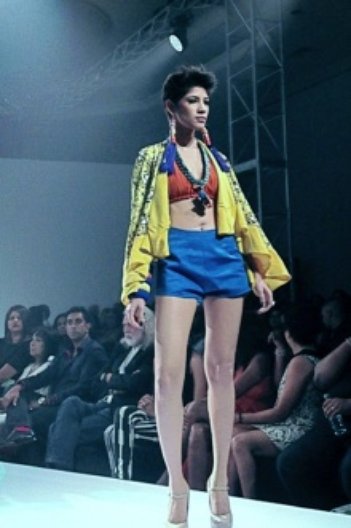 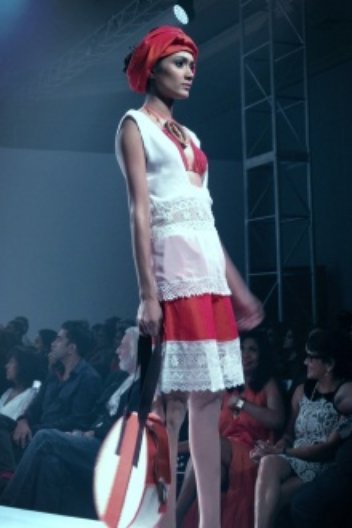 Stefan Siegel, the founder of NOT JUST A LABEL (NJAL), flew to Sri Lanka to attend the 10th annual HSBC Colombo Fashion Week (CFW). The event which ran from the 3rd to the 5th of April showcased a pick of Sri Lanka's finest fashion designers with the aim to promote and encourage local talent. This year the British Council, alongside the local Young Entrepreneur of the Year, Prassanna Pathmanthan, invited Stefan to share his story at CFW with Sri Lankan fashion industry members and entrepreneurs at a series of exclusive workshop aiming to encourage local talents to start their own fashion enterprises. With NJAL's belief to discover and represent the creative landscape beyond the big names in fashion, this unique not-for-profit event was another opportunity for us to extend our supportive platform internationally. Interestingly, with Stefan in Colombo and myself in London, we were both seeing completely contrasting perceptions of Sri Lanka and its prospering fashion industry. Here we explore, whether In terms of fashion, is Colombo truly a paradise city?

On researching this article, 5,400 miles away, I came across an ancient notion regarding Sri Lanka as the original Garden of Eden. Appropriately 'paradise' is a word used frequently in reference to the island, which from an arial view point on the map, lies situated like an emerald against a sapphire blue Indian Ocean.

The immaculate perceptions of Sri Lanka presented to the West through holiday brochures, are merely a superficial insight into a country that has in recent history endured decades of fighting; firstly for its independence, then throughout a civil war that lasted for twenty five years. Finally, it had to reclaim life and its normalities back after the devastation caused by the Tsunami in 2004. However, underlying these hardships is a rich ancient culture based upon a foundation of Buddhist beliefs. Furthermore the island's geographical location means that, despite its small size, it is incredibly rich in biodiversity. It bodes a population who are both aware and active in the conservation, and in the celebration, of their culture and the beauty of their homeland.

The ethical mind-set that appears to prosper from the nature that inhabits the island is providing Sri Lanka's fashion industry with a unique source of inspiration. Mindful fashion is a reoccurring element amongst young designers, encouraging a more creative and resourceful design and production process.

Sri Lanka based ethical fashion labelKhogy, is one such brand who are embodying this notion with their most recent collection, Fish for my Unborn Children. Jenny, the innovator behind the collection says 'Fish for my Unborn Children was created in light of the United Nation's predictions that the world's commercial fishing stocks will collapse by 2048. The collection is made by using vegetable tanned waste Tuna skins, and developed locally in Sri Lanka.

Tuna is one of Sri Lanka's fundamental exports, making Jenny's idea of recycling the bi product, incredibly enterprising. 'We work with many fish filleting factories outside Colombo, who generate tonnes of waste fish skin each month. From here we then turn their waste into leather by letting our small team of workers, from a women's association in Negombo, treat the leather. The ladies do part of the tanning of the skins from home, and the aim is that with the increase in sales we can provide them with a constant alternative income, managed between their daily duties of family life.'

Aside from generating innovation, Sri Lanka's fashion industry is also opening doors for people; creating creative opportunities where there were none before, and of course, much needed jobs.

This is Charini Suriyage's third year working with Colombo Fashion Week. She launched her ethical underwear brand, Charini three years ago at the event and says 'it has been a rewarding and fruitful experience and has given me a kick start for my brand.'

But what makes the event so unique? According to Charini 'Colombo Fashion Week is the premier fashion event in Sri Lanka and has been instrumental in bringing Sri Lankan design and talent to the forefront of the world fashion stage. It's a great opportunity for Sri Lankan designers, especially the new comers, to showcase alongside international designers.'

As the fashion industry globally faces even more pressure to adapt and meet the ethical demands of its clients, Sri Lanka is most certainly setting an example for how it could be done. So much so, they were already used at London Fashion Week's International Fashion Showcase in February, to 'highlight how fashion can encompass sustainability.' The same way Sri Lanka's beauty comes naturally, as does their fashion industry's tendency to opt for ethical choices. Charini goes on to say 'Sri Lanka is a country that's gifted with many resources that could be utilised in the fashion sector.'

'On the other hand, traditional crafts of Sri Lanka is another area that needs to be revived and has potential of being linked with contemporary fashion. The country has a well-established garment manufacturing segment, which has set international ethical standard across the industry. It's important to maintain Sri Lanka's unique position as a sustainable apparel manufacturer both in the mass market manufacturing segment as well as the small scale boutique brands.' Having established Sri Lanka's fashion industry as an ethical advocate, Stefan reflects upon his personal experience of Colombo Fashion Week...

Colombo is everything I did not expect. It is not your exotic tourist destination, and it is not a place that I would say is celebrating its culture or traditions as much as you’d expect. The look of the city is a mix between your typical overcrowded Asian towns, while the centre towards the port features a series of colonial buildings that clearly show the influences of the past. The past crises, over 30 years of tensions as well as the Tsunami in 2004, have left their marks. However, people are making a huge effort to compete with their Indian neighbours to the North and apparently Colombo has never been as clean as it is now. Many colonial buildings are under refurbishment and there is definitely a wave of excitement, a sense of moving on and becoming a global destination for business and tourism.

There is no denying that various influences from other continents are making a mark. From Chinese electronic goods, to the usual European and American global brands, as well as Middle Eastern luxury lifestyle, there is something for everyone. For example, the Krrish Tower, Sri Lanka's tallest building, is a project that has now been approved and has already caused many controversies before even being built. It would, for the first time, offer luxury apartments shopping malls and a new lifestyle to the modernised society of this country.

However, those Sri Lankans I’ve met, seemed very determined of what they don't want: it is vital to them to create their own identity, but time is running out. The question that arises is, how can we give the next generation the tools to step up their game to create a new identity, an independent culture? When looking at the collections that have been presented over the past days, one must realise that we are still seeing many uncoordinated mixes of designs and influences, and I wish we had seen more collections linked to the country’s rich culture.

Deneth Piumakshi, a young designer, presented a collection entirely made out of Cheetha fabric, a traditional and colorful flower fabric, that is commonly only worn and used in villages. Deneth told me how much she was struggling to change the people’s perception, since she was belittled for using such a provincial cloth.

One cannot deny that Sri Lanka's fashion identity, of course, revolves around traditional clothing: Saris and Kaftans, as well as Batik craftsmanship. Many designers are making use of these elements in their collections; however, an analysis of styles of local 'fashionistas', makes it is apparent that the country is still looking for one identity. Colombo Fashion Week can certainly help to initiate this, as in the end, its focus is clearly set on younger designers: Ajai Vir Singh, president of the event and the initiative, is convinced that by giving the talents the tools and support structures they desperately need, we could very soon see the country’s cultural export rising.

Together with the British Council, NOT JUST A LABEL was also invited to hold a workshop on the second and third days of fashion week. It was exciting to see how many student, designers, entrepreneurs and keen listeners signed up for it. The Blue Elephant at the Hilton Hotel was filled with a young generation, keen to make change happen and listen to the story of NJAL and its designers. My lecture was followed by a panel discussion that I shared with two of Sri Lanka's most notable designers, Sonali Dharmawardena and Radhika Perera-Hernandez.

While Sonali could be described as a local artist, creating some of the most sought after Batik designs, Radhika gained her fame by working as a designer for Beyoncé's very own clothing label in New York. While answering the questions from the audience, many social as well as structural issues for starting a business in Sri Lanka became apparent.

Besides the usual problems entrepreneurs face internationally, the local ecosystem seemed to be characterised by a few critical issues many youngsters face. One of these seemed almost insurmountable for many eager talents — it does not matter what their families' backgrounds are, jobs in the creative industries are usually not deemed as honourable and respectable by their parents.

A sheer number of students told me that they were forced to study law, economics or medicine, and would rather do something else. My bold thought was, why not be rebellious, go against the stream and be different, but I soon came to realise that it wasn’t that easy: Sonali herself, now 44 years old, mother of two, and owner of Sri Lanka's most successful couture design business told the audience that her father, now 80 years old, still had not attended one single fashion show of her brand.

We at NJAL were more than glad to be part of Colombo Fashion Week, discovering a new region and culture, and we will hopefully be able to promote this country’s unique talents on a global basis, without borders nor rules.

NOT JUST A LABEL (NJAL) is the world’s leading designer platform for showcasing and nurturing today’s pioneers in contemporary fashion.

Set up in 2008 to infuse new life into fashion, NJAL was quick to become an indispensable tool for the industry; helping designers gain exposure and finance their progression independently by providing an easily accessible retailing forum via its online shop. NJAL is a creative hub with a red carpet following setting trends and perpetuating innovation, an infinitely expanding destination devoted to facilitating growth in the fashion industry.