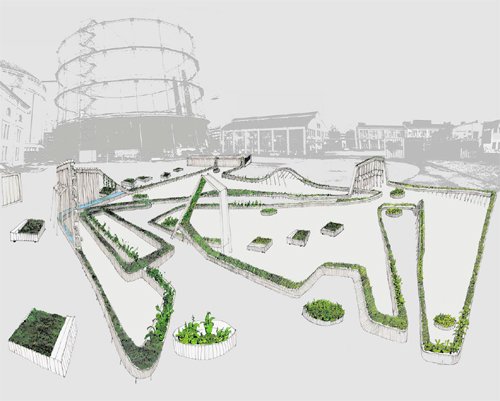 This year the title of World Design Capital is held by Helsinki, with a range of activities taking place throughout 2012 to acknowledge the role that design has played in improving social, cultural and economic life in the city.

The British Council has been working with Wayward Plants and Dodo, an enviromental NGO, to curate a series of public garden project in the city. Wayward Plants created the Union Street urban orchard during London Festival of Architecture during 2010 and returned to the same site last year to grow the Urban Psychic Garden, featured in our current touring exhibition Everything Forever Now.

The first installation willl see a 50m wall of hanging plants created during the Flow music festival in early August, held at Suvilahti, a disused power plant and gasworks in the north east of the City. The material will be  donated by festival goers and participants will be encouraged to provide personal stories and ideas connected with the plants.

The second part of the project will utilise the local tram network and again asks the people of Helsinki to donate plants to a special 'plant tram' that will travel through the city in August. The plants will be used to create an urban garden in the goods yard at Suvilahti, as part of the Everyday Discoveries project taking place from the 6th - 16th September. The project will include an exhibition that showcases design solutions to everyday situations from over 20 countries, alongside a café, design shop and the garden

For Everyday Discoveries, Wayward Plants have created a design inspired by the iconic wooden roller coasters found at the Linnanmäki Amusement Park, opened in Helsinki for the 1952 Olympics. A shipping container will be converted into a temporary 'tram station' next to the installation, with the material on display inside it mapping the journeys the plants have travelled and documenting the participatory nature of the project.