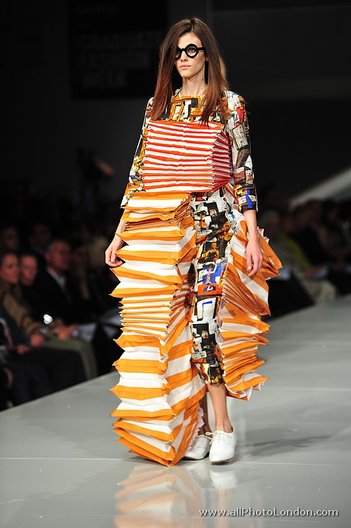 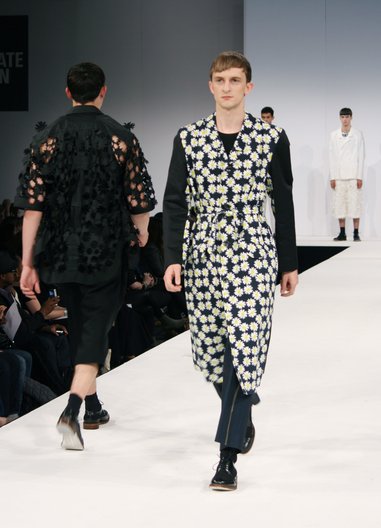 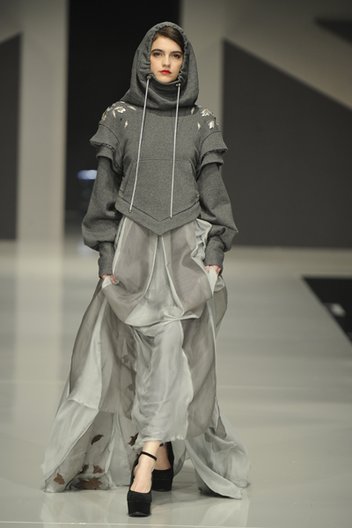 I’m very fortunate to say that my position in the British Council’s Architecture, Design and Fashion team has allowed me to travel a bit of the world and meet some very interesting international fashion designers and students.  I’ve been able to tour our exhibition Reconstruction: Cultural Heritage and the Making of Contemporary Fashion, which has travelled through Kazakhstan, Uzbekistan, Bangladesh, Pakistan and Russia, and will shortly be on its way to Georgia.  The opportunity has allowed me a greater understanding of these fashion industries, but also given me a greater appreciation of the British fashion industry.

During my travels one thing that stood out as uniquely British was the support of graduate fashion work, and this was highlighted to me at the conclusion of Graduate Fashion Week recently.  Of course, the British fashion industry has a long history and is worth a staggering 21 billion pounds, but I’m still always so proud to see the immense support graduates receive.  It’s no wonder students come from around the world to complete fashion degrees at British art and design universities.

Of course, it’s not necessarily easy once everyone graduates.  There are many negative perceptions voiced by UK graduates and designers– comparing the UK fashion education system to the business savvy courses in New York, condemning British industrialists and their traditional lack of support for building the industry, the massive decline of local production with the rise of out-sourcing and the migration of UK graduates to Paris fashion houses.  However, having seen some less-established fashion industries, it’s made me realize how pessimistic this attitude is.

In Pakistan I was told by fashion students that it’s only been in recent years that studying art and design has become acceptable, and there is still a great deal of negativity surround the disciplines.   In Bangladesh I saw young designers passed over for an older, established and traditional generation of ethnic dressmakers.  There’s also certainly not the opportunity for impoverished classes to study subjects like fashion.  While it might take a bit of change out of a fashion graduate’s income for years to come, the British government at least makes it feasible for all classes to make an attempt at a fashion degree.  In some countries, there’s hardly a fashion week, let alone a graduate fashion week which received more than 20,000 visitors coming to view the collections of more than 1,200 BA fashion graduate students from 40 universities and colleges.

While the Graduate Fashion Week sponsor George isn’t necessarily known for pushing fashion boundaries, it’s great to see such a huge retailer investing in Britain’s creative talent.  Last year they hired 68 UK graduates.  They’re part of GFW’s "protégé programme", which sees seven UK retailers, including Karen Millen and New Look, putting graduates in temporary but paid work to help build up the professional experience necessary to get a job these days.  While the inherent nature of the British fashion education system pushes young designers to denounce the high street for its lack of creativity and radicalism, the current financial crisis makes setting up a new label hugely difficult and graduates must accept the benefits of working in the high street industry.

While it may also have a great deal to do with the experimental textiles and bright colour palettes, I found this year’s Graduate Fashion Week hugely optimistic and uplifting. It was wildly vibrant, and I’m sure a great credit can be given to the multi-cultural atmosphere of the universities as well as supportive organizations like GFW in times like these.