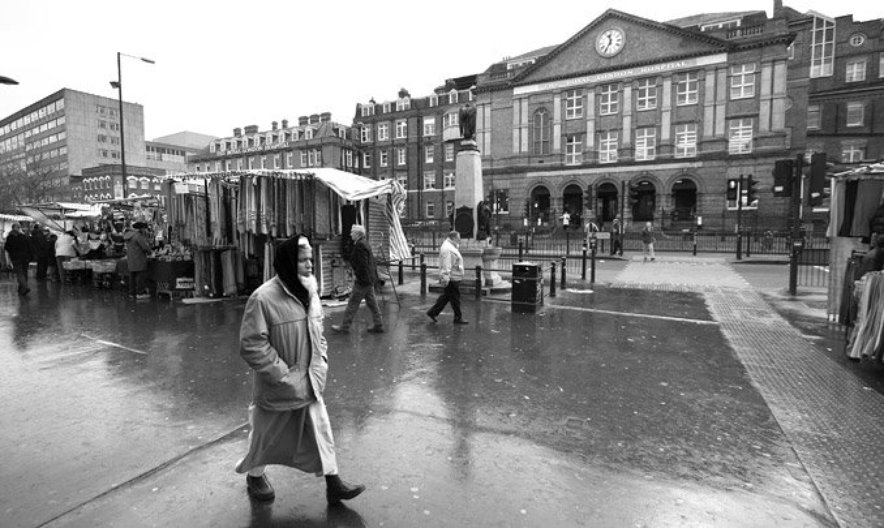 The first instalment of London Men’s Fashion Week, or the London Collections: Men, has allowed ADF the chance to revisit the work of William Richard Green, the young menswear designer who we helped take to Colombo Fashion Week in Sri Lanka in March.  Will displayed his S/S 2013 collection ‘Home is Where the Heart is’ as part of the Fashion East installations this weekend.

Will’s work is always a celebration of Britishness through the use of all British-sourced materials.  However, with this collection he took the opportunity to explore themes he felt were uniquely British in the areas where his clothes are actually produced.  However, it was a treat to see Will’s trip to Sri Lanka reflected subtly in some of these designs.

When considering Yorkshire, he came across a film about 6 soldiers from the area going to war, and began to look at military styles as an influence for the collection.  This brought him back to uniforms he saw in Sri Lanka worn by traffic police.  They wear long white sleeves which button on over their short-sleeved olive uniforms.  Will uses this style in a utilitarian-cut jacket inspired by photographs of the builders working on the Channel Tunnel.

The collection also references the community of Whitechapel in London, where Will’s studio is based.  Upon his return from Sri Lanka, he took special notice of the traditional and ethnic dress worn in the predominantly Muslim neighbourhood.  He realized that many still wore their traditional dress, but adapted it to fit with the English weather by wearing bomber jackets or heavy overcoats.  He uses this element of layering in the collection with long shirts not unlike a kurta styled over trousers and finished with a jacket full of hidden utilitarian pockets.

Of course, it’s great to see work influenced by the British Council’s support which reflects on the internationalism of the UK and expresses cultural understanding.  Interestingly, I noticed a trend during Graduate Fashion Week for a similar use of traditional Muslim dress in menswear.  While working in Pakistan and Bangladesh, I learned from colleagues and fashion lecturers that there is very little interest in designing menswear in these countries, despite the fact that it is more common for men to don western dress than women, who predominantly stick to traditional dress.

It’s encouraging to see young designers exploring the different cultures surrounding them and pushing these boundaries.  In terms of cultural relations, this melding of styles is an important first step towards understanding.

Be sure to check out Will’s fashion film on Dazed Digital about the collection.  The film, which is directed by Morgan O’Donovan, explores the British landscapes that have inspired the collections and features music produced by Will and Gustave Andre.