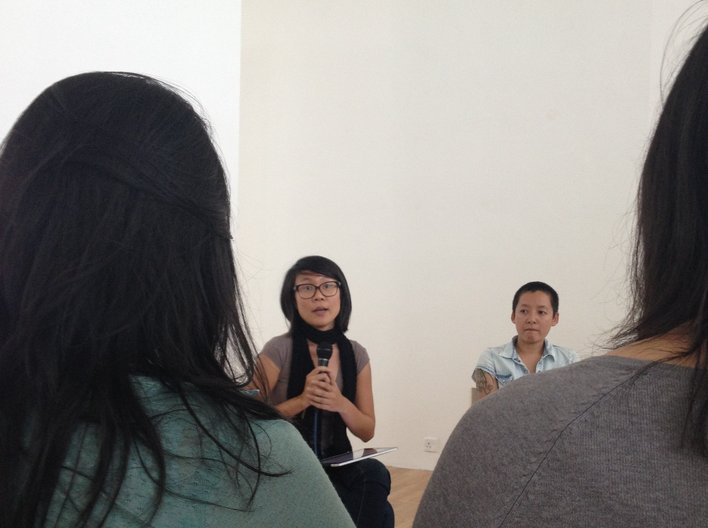 In Kuala Lumpur all the street signs bear the Poskod (Postcode) for the area and it’s this local city quirk which gives a name to the Poskod Malaysia collective – a fantastic bunch of creative individuals in KL who are interested in the city - its streets, people, communities and activities.

As part of the collective’s many activities (which span writing, events, photography) the team organise Poskod Talks, a monthly get together to share ideas and stimulate discussion on the city among designers, the creative community and everyone who wants to join in.

I was in KL for the sixth installment in the series convened and chaired by Sze Ying Goh on the subject Design: making things happen at MAP which coincided with the launch of the Everything Forever Now exhibition at Publika next door.

First up in the session was Henrietta Thompson, curator of the Everything Forever Now exhibition, writer and all round design champion who talked through three self-initiated projects. Two of these were temporary projects by architects (and groups of friends and volunteers) the Urban Physic Garden and Cineroleum. The third was the story of Village Underground founded by furniture designer Auro Foxtrot. Henrietta discussed how restrictions had driven ingenuity, the different means of finance (grants, ticket sales, crowd-funding and rental fees) that these three designers had utilised and tracked the projects from their inception to their current status.  While very different, these were all examples where designers had transformed space and brought people together, drawn attention to urban issues and contributed to performance, spectacle, community and cultural development of a neighbourhood.

Kevin Mark Low continued by telling two stories about his small projects – the competition winning archiebunker chair and Sibu pavilion building. Kevin encouraged greater self-reflection and self-criticism amongst designers seeking to create and discussed the challenges he faces as a designer trying to create projects that are truly sustainable – both small and large.

The inspiring Ezrena Mrwan followed next and introduced her project the Malaysian Graphic Design Archive. Ezrena instigated the project after attending an Icograda conference in Cuba and where she realised there was little access to malaysian design history and decided to do something about this. The online collection consists of designs from 1800 to the present day.

Ezrena has been dedicated to growing the archive since 2008 now and has spent her time visiting archives, piecing together information, buying prints and artefacts and compiling a timeline of Malaysian design. An ongoing task Ezrena shared the trials and triumphs of the project from the website getting hacked (and getting it fixed) to her personal investment in securing artifacts, the poorly catalogued existing archives and the volume of what materials are already lost. already gone. Ultimately, Ezrena’s story was one of passion and persistence and proved that even with no support it’s possible to create something for wider benefit. My hope is that the project will soon get serious support, perhaps from a museum or a university to help her take the project forward.

The afternoon was complete with a presentation from Sali Sasaki who gave an intelligent, insightful and personal presentation on her route through design, UNESCO Creative Cities and her current work including Crafted.  Sali touched on the focus of her current and previous work, explorations into earlier work in design, culture and development; and the interrelationship between design, culture and local identity. Amongst the discussion on creation Sali questioned the continual pursuit to create new things, reminded us of the need to appreciate and value that which already exists and suggested consideration of a slower life.

An incredibly interesting afternoon, you can see more about poskod including a short interview with Henrietta at Poskod.my.