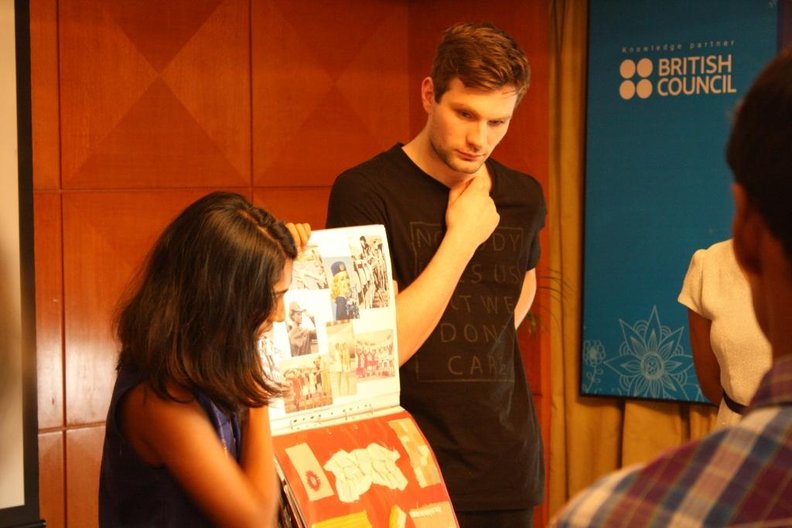 A young Sri Lankan designer and Will discussing her design process

Shortly after London Fashion Week, we sent London-based menswear designer William Richard Green to Sri Lanka to participate in the 2012 HSBC Colombo Fashion Week.  Colomobo Fashion Week has a strong focus on sustainability and ethical fashion, and Will's collection fit this brief in a strangely British way.  His collections reference subcultural style and his personal humour in the design, but reflect his British heritage through tailoring and 100% British production.  He has a strong dedication to producing only in the UK and using fabrics made in UK textile mills.  He also prides himself in knowing everyone involved in the production of his clothing.  And while traditional heavy woollen British fabrics aren't especially suited to the South Asian climate, Will showed his A/W 2012 collection with a few modifications more adapted to this, including shorts.

While in Sri Lanka, Will sat in on an 'Ethical Fashion Roundtable Discussion' chaired by Colombo Fashion Week founder and director Ajaiy Singh and attended by designers Bibi Russell (Bangladesh), Rizwan Bayg (Pakistan) and Samant Chauhan (India); and British Council staff, including  Tony Reilly (Country Director Sri Lanka), Shreela Ghosh (Director Arts Wider South Asia: SL, Bangladesh, Nepal, Pakistan, Afghanistan and Iran).  It was a great oppportunity to reflect on the British concept of sustainability through heritage brands.  Will also gave a talk with local young designers and creative entrepreneurs about the struggles of starting up a fashion business in the UK.  The young designers were excited to share their experiences with him as well and to find out that the fashion industry is tough work all around the world.

Will frequently works with filmmakers like Zaiba Jabbar to produce fashion films to show alongside his collection.  The British Council has been doing a great deal with fashion film recently, including a workshop in Sarajevo with filmmaker Kathryn Ferguson, and we were excited to have Will present his A/W 2012 film at the start of his show and promote this growing art form to the Sri Lankan fashion industry.  Considering London Fashion Week's newly launched FASH/ON FILM festival, this seems like an apt move.