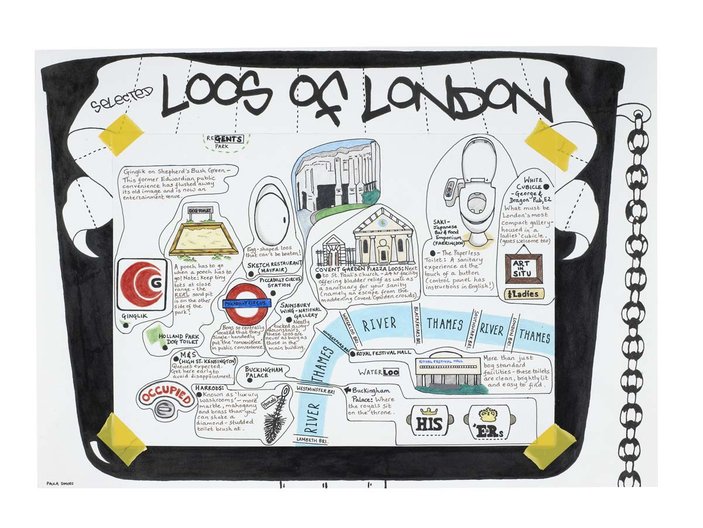 What would we do without maps? With an abundance of new technologies evolving every day and the constant talk of this ‘digital age’, the beauty and simplicity of the hand drawn or printed map is sometimes taken for granted. On a recent trip to Spain I was abandoned by my beloved GPS, letting me know about my left turn 500 yards too late and trying to drive me into brick walls, apparently it does not agree with European roads. So, off I went to get a road map and prepare myself as navigator through the hilly, unknown territories of North Spain. What an adventure it turned out to be, our scenic route took us through crumbling old villages, passed field after field of sunflowers and instead of rushing along for the ‘RIGHT TURN AHEAD’ we calmly made our own way, in our own time and enjoyed stumbling on these little places I probably would not have looked up from my book for had the GPS been barking orders at the driver.

This is something I hate about London; GPS on foot. The number of people running around with their face glued to a tiny screen following the blue dot to a dead end. Making people follow it down crummy, rammed Oxford Street to get from A to B rather than recognising that there are 8 small streets you can follow, full of beautiful buildings and parks and spaces waiting to be discovered by the person that looks up and around and which will get you there quicker and probably happier.

This is why I went to have a look at Hand Drawn at the Museum of London, an exhibition of alternative maps drawn by the people of London. In collaboration with Londonist a call was put out for the public to submit maps of their London. The result is some beautiful, individual views of the capital that map personal experiences, memories, depict communities or show the history of an area. One of the first things you learn in architecture is how to map a space, “think outside the box, map the litter, map the noises, find your programme and fill the void!” Mapping the unconventional is sometimes a way of identifying a problem or coming up with a new idea, a way of distinguishing what a community wants rather than what a site survey says is missing.

Martin Usborne’s map of Hoxton Square took this kind of approach depicting where you might find other dog walkers, circus acts, a lack of sunlight or a culture void in the square. The maps on display were all light hearted and quite humorous, some mapping the Loos of London, or the Tree of Brixton’s cafes and pubs.  Some were gifts to ‘country bumpkins’ lost in the big City, showing where to find parks and green spaces. Others were factual, like Julia Forte’s map of firsts, which showed where the first Wellington boot was made in 1800 and where the first pillar box stands. My personal favourite was by Flory Leow, her map, ‘The (as yet) Unknown Bloomsbury’, took you on a personal adventure of her favourite spots around the area, with little anecdotes hinting at her experiences and relationship to the hidden parks or people watching spaces.

The exhibition at the Museum of London is closing on September the 11th; if you miss it I suggest having a look at some of the other submissions online. There is something thoughtful about knowing of other peoples associations to a place and if you want to submit your own map there is still time, just step away from the blue dot.