My week with the ADF team 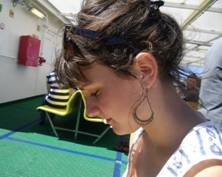 This week Arts, Design and Fashion have kindly taken me under their wing to show me the ropes of the British Council’s Arts Department. And what a wonderful week it has been!

Once familiar with all the projects going on within the ADF team, I started a project in which I investigated past and current projects within Africa, South America and the Middle East which look to develop the country socially or environmentally. The project was interlinked with the International Architecture and Design Showcase, set to take place in the summer of 2012 as the project covered these two sectors from a humanitarian and environmental angle.

I wanted to share some of what I found interesting with you as well as my favourite find– the Tubehotel! The Tubehotel is an innovative, sustainable and fun hotel in Tepoztlán, Mexico. T3arc, a Mexican architectural firm, helped from a structural point of view to create the Tubehotel – a hotel built with recycled hollow concrete piping. The industrial pipes were cut into fractions and blocked off at the end to create rooms. They are stacked in threes somewhat like a cheerleading pyramid and planted all around a yard. If they aren’t too industrial for you they do look rather cosy!

When searching for developmental projects in South America I was inevitably bombarded by links that informed me about the proposed improvements that will take place in Rio de Janeiro in preparation for the Olympic Games there in 2016. What was most fascinating to read about was how Rio de Janeiro has committed itself to tackling the extreme poverty of the favela slums by transforming it. The architect Pedro Guglielmi has been chosen to reconstruct the area incorporating a transport network, hospitals, schools and leisure facilities into his plan.

I am excited to keep an eye on how this project will develop in the next few years as it is already being heralded by Rio as the social legacy that the Olympics will leave behind after 2016.

When researching my project it was interesting to see how people working in architecture, design and fashion were responding to humanitarian and environmental problems and tackling these issues through their work all over the world.

I would like to thank all of the team for having me and for giving me an insight into such an interesting organisation - the work done here is so creative and diverse. It really has been a delightful way to spend my break from the classroom.