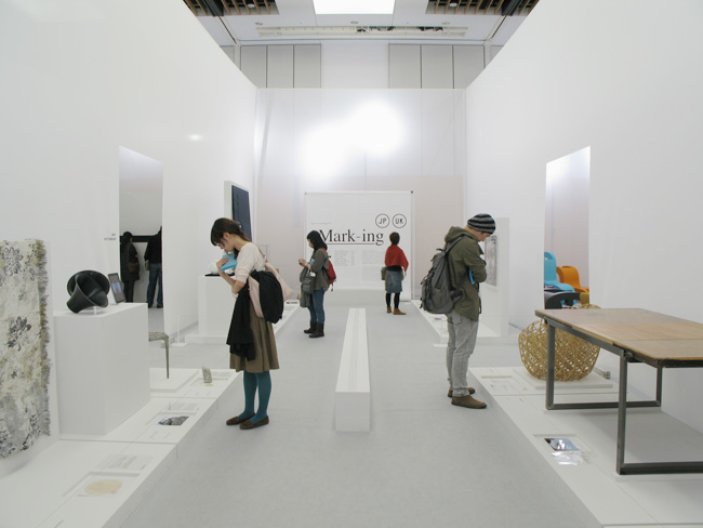 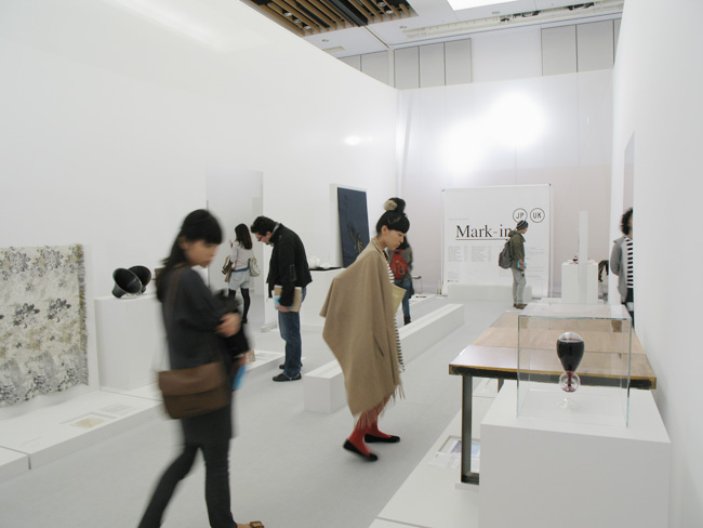 Max Fraser, co-curator of Mark-ing, tells the story behind creating the exhibition:

Over a year ago, I had some email correspondence with Tsuyoshi Matsuzawa, the owner of Japanese furniture brand, E&Y who was developing the idea to present UK-Japan design exhibition with the British Council. He asked me if I’d be interested to co-curate an exhibition with him on Japanese and British designers with the idea that it would be displayed in Tokyo and London. I was immediately drawn to the project (any excuse to work in Japan!) but we hit the usual difficulties of lack of funding and time. Well, I’m delighted that the team in Japan managed to secure the funding and partnership in making the exhibition a reality this year.

Indeed, in the Summer 2011, I got another email saying that the project was going ahead and would be exhibited at Tokyo Design Tide (the city’s main annual design event) in late October, so I immediately went about selecting a handful of UK designers to include in the showcase. Tsuyoshi had given me the criteria of age and asked me to select ten designers, mainly those born in the 1970s and 1980s. It was certainly an unusual starting point but one that would inherently succeed at providing an overview of design output from a defined and burgeoning generation.

I was conscious that I wanted to choose designers who had transitioned from initial success into a more steady and sustainable phase of their careers. I was keen to celebrate individuals who work for themselves and who place importance on carving a strong directional path in their style and approach. The final 8 names that were included varied from those working at the one-off handcrafted end of the spectrum, to those embracing new technologies as well as those working with manufacturers for industrial production. UK participants were Moritz Waldemeyer, Ismini Samanidou, Paul Cocksedge, Max Lamb, Geoffrey Mann, Helen Amy Murray, Hannah Martin and Benjamin Hubert.

One design from each of the eight UK participants were exhibited on white plinths at Tokyo Midtown from 29th October to 3rd November 2011. Facing them were eight Japanese designers, as chosen by Tsuyoshi. Interestingly, he and I did not compare notes nor try to match up any of the designers from either country. We did not want to compare, contrast or intellectualise the creative output of both nations. Actually, we were quite happy for the visitors to draw their own conclusions and so the curatorial narrative was kept to a minimum.

Of course, simply showing one object on a plinth doesn’t give away much about the individual character of each designer so we asked each of them to provide one example of a person, place, moment or thing that was instrumental in shaping their career, called a ‘fragment’. Each was communicated either with real objects or photos and accompanied by a short description which imbued a personal touch to the minimal displays.

I was fortunate to be in Tokyo for the opening of the exhibition, together with two of the designers from my selection: Benjamin Hubert and Hannah Martin. Between interviews, talks and press conferences, we enjoyed the wonders that make up Tokyo and Japanese culture. It was my fourth time to the city but was no less spectacular. Somehow, the city seems very familiar on the one hand but totally foreign on the other. The importance they place on functionality and the poetry with which they apply it is exciting to observe. It is no wonder that all designers love visiting Japan - somehow one always leaves Japan feeling that there are still vast opportunities to embrace in the world!

It is our intention to bring the exhibition from Tokyo to the UK in the future so keep an eye on this website or mark-ing.info for more details.

Max Fraser is a design commentator, working across the media of books, magazines, exhibitions, video, and events to broaden the conversation around contemporary design. He delivers content, commentary, and strategy for a variety of public and private bodies in the UK and abroad. He is the author of several design books including DESIGN UK and DESIGNERS ON DESIGN, which he co-wrote with Sir Terence Conran. He owns Spotlight Press, a small publishing imprint, recent titles include LONDON DESIGN GUIDE and DEZEEN BOOK OF IDEAS.