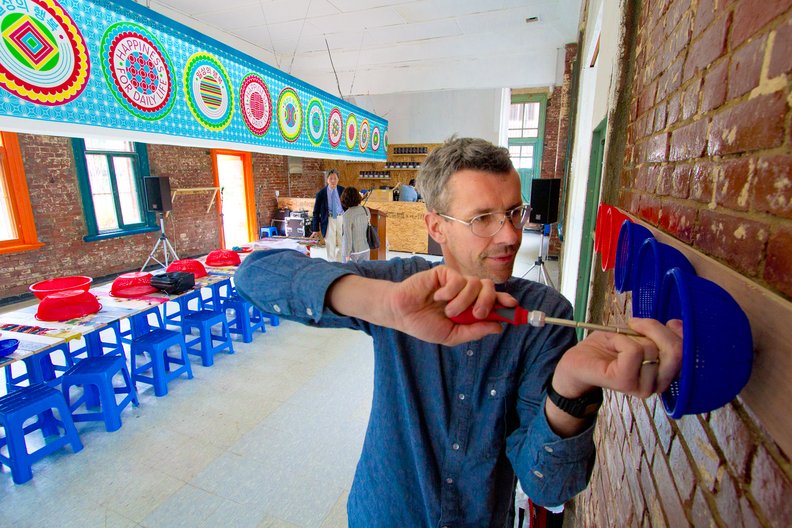 Michael Marriott in the Happiness for Daily Life cafe. Photo by Igor Tyuterev

Happiness for Daily Life is a project by the British Council and curator Clare Cumberlidge that explores cultural-led regeneration in Korea paying special attention to resourcefulness in design and local knowledge, character and identity.

I was one of four UK designers who took part in residencies at the Korean University of Cultural Heritage (KNUCH), which led to design commissions and the opening a temporary design café in Gongju City. The other designers were Fabien Cappello, Linda Brothwell and Anthony Burrill.

We worked closely with a fantastic team of people in the UK and Korea (the project and partners in Korea were directed by the British Council Seoul office's - amazing Yoonjoe Park, who somehow managed to juggle all complexities.) Within Gonju City's regeneration team was Mr. Park (no relation - Park is one of the most common surnames in Korea), who's enthusiasm for the project led to a conversation that gave birth to the project title, Happiness For Daily Life. Thanks to Mr. Park, we have managed to describe succinctly the bulk of the aims of the project and also the most critical philosophies of design and life, which have driven the treatment of the building and the project as a whole.

My role on this project was kind of like an interior architect, in that I directed the re-modelling and treatment of the building drawing on my design ethos. I also designed a table and its main function, beyond supporting coffee cups, was to incorporate the craft work of Korean students from KNUCH. Likewise, I designed a lamp shade, which was a support for silk fabric that Anthony Burrill designed drawing on traditional Korean textile traditions.

Aside from these pieces of furniture and fittings, we sourced the seating from the local market – a fantastic super-cheap everyday plastic stool seen all over Korea. One of those universal objects which does its job so incredibly well and is so ubiquitous that it is hard to frame a photo of Korean life, indoors or out, without one being in shot. It inevitably proved the perfect choice for coffee and a cake in the Happiness for Daily Life café.